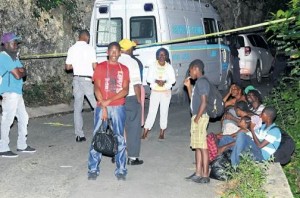 FOUR men transporting a $2-million payroll for workers on the Chinese-constructed Linstead to Moneague Leg of the North/South link of Highway 2000 were brutally murdered yesterday in a daring daylight robbery in the community, of Bowers Wood on the outskirts of Bog Walk in St Catherine.
The dead men, all said to be employed to the project have been identified as Courtney Courbourne, 38, Carlton Scott, 37, Greg Harris, and another man identified only as Kirk.
According to the police, approximately 3:30 pm the men were travelling through the community with the cash to pay a group of employees who are working on the highway when they were ambushed by criminals carrying high-powered weapons.
“Reports received are that the men intercepted the vehicle and opened fire while they were making their way to the community,” the police told the Jamaica Observer.
Police said the vehicle transporting the men overturned as it appeared the driver was attempting to escape but was impeded by the narrow roadway.
The criminals then went over to the injured men as they lay suffering from gunshot wounds, and fired several additional shots.
The men then took off with the payroll.
Yesterday, Member of Parliament (MP) for North Central St Catherine Natalie Neita-Headley described the attack as vicious and brutal.
“The incident has really left me in shock,” said the MP, who was at home with her family when she got word of the tragedy.
Neita-Headley, during a late evening visit to the area, told the Observer she was making preparations to meet with some Chinese nationals to allay fears and assure them that work would continue on the highway.
It is understood that close to 70 people were left without pay.
Residents in the area described the incident as the worst to take place in recent history.
“Our community is a peaceful and quite area, and to see something like this come happen has left us all in shock,” said Horace Johnson, a 48-year-old family member of one of the victims.
Peter Lee, another resident in the area, said the incident has left him traumatised.
“The men were hard-working, honest men and to see their lives snuffed out like that is just sad,” said Lee.
The incident comes little over one month after four people where gunned down in separate incidents in Linstead, St Catherine, in August.