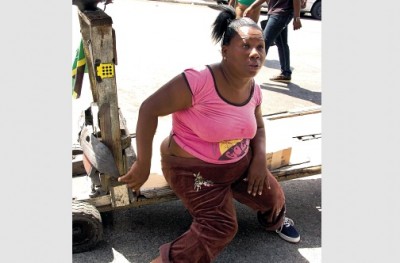 CRIMINALS yesterday sunk to an all-time low when they held up a physically challenged woman and robbed her of her wheelchair, leaving her lying on the sidewalk on Spanish Town Road in the vicinity of May Pen Cemetery. Coretta Vincent, a 37-year-old resident of Waltham Park Road, Kingston was travelling in her motorised wheelchair along the busy road, heading to downtown Kingston to buy goods for a small stall she operates in the commercial hub of the capital city when the armed thugs struck.
“I was going to town to purchase mi sweetie and other items to do my little hustling when a group of men drove up and held me up at gunpoint,” Vincent told the Jamaica Observer.
The disabled woman, who has lost the use of both legs and one of her hands, said she could not even raise her hands above her head when the criminals pointed their guns at her. The frightened mother of one said her life flashed in front of her as she began to brace herself for what was to come next.
She said she was preparing herself to be robbed of the little money she had to purchase the items but was left dumbstruck when the criminals did the unthinkable.
“One of the men come out of the van and him show mi him gun and seh a di wheelchair him want,” said Vincent, tears in her eyes as she related the ordeal.
“The men came out of the vehicle, took me out of the chair and left me on the roadside and then sped off in the vehicle,” she added. Vincent said she was so traumatised she could not even call for help as she lay on the roadside. Help came about 20 minutes later in the form of a cart operator, who took her downtown.
“A come mi a come on the road and see her on the roadside and put her on the cart and bring her come a town,” said the cart operator, who asked not to be named. Yesterday, other vendors in downtown Kingston were fuming over the cruel act.
“You can imagine if dem deal wid her that way a how dem would deal with the able-bodied persons,” said one vendor, who plied her trade along West Queen’s Street.
“All criminals like those you caan sorry fi dem when things reach dem,” said another vendor. The police say they are investigating the robbery.