HELP SAVE THIS BABY! 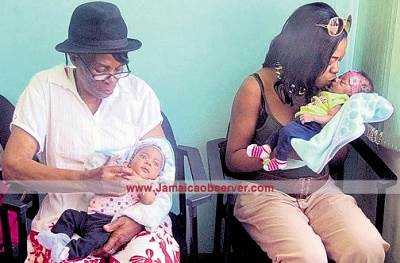 A St Ann mother is appealing for assistance to get one of her six-week-old twin daughters to the United States to do a heart surgery which is expected to save the infant’s life.

When Nellveita Barrett, 25, gave birth over a month ago, she was happy to be a mother for the first time, and not just any mother, but the mother of twin girls. However, the celebrations of the birth of her children was soon turned to praying, moments after it was revealed that one of her girls was not well.

“She turned blue shortly after being born,” the mother told the Jamaica Observer.

Amaiyah Delmonte has a single ventricle disorder and has three holes in her heart. Her condition requires that she gets medical attention overseas. However, with the hefty bill of approximately $J10 million or US$100, 000, Barrett needs help. She pointed out that her daughter will also need to travel in a special aircraft, since the oxygen level in the regular planes would not be sufficient.

“She was on life support for three days … they said she wouldn’t make it,” Barrett recalled.

Barrett said that it was a very devastating experience for her because she did not expect anything to go wrong.

She said that she had the usual morning sickness during pregnancy, but nothing was “out of the ordinary”. There was no indication that one of her girls would be sick. Now she said it is a miracle which is keeping her baby alive.

“Unborn babies usually have a duct from the heart to the lung. That is what is keeping her, but it is not producing enough oxygen,” she said.

She explained that usually the duct disappears 15 hours after birth. However after six weeks, Amaiyah still has hers.

This has led the mother to believe that “she is a miracle baby.”

While many are of the opinion that she should focus on her other daughter, Kay-Leigh, Barrett will not give up on Amaiyah, who remains vibrant in spite of her illness.

“Their reaction at the hospital was that she (the other baby) was okay so I could give up on her (Amaiyah), but that was not an option,” Barrett said she reached out for prayer from wherever she could.

She said that one doctor told her it is finished because the baby is being supported by a machine. However, after three days, Baby Amaiyah was able to breathe on her own.

Barrett said that Amaiyah was admitted to the Bustamante Children’s Hospital for several weeks and was only released to her over a week ago. She said that the hospital did not want to operate on the child because of her small size. Amaiyah, who weighed over five pounds at birth, has lost weight due to her illness and is now a little over four pounds.

The A1 Dupont Hospital in Delaware has indicated that it would do the surgery.

Barrett said that based on the urgency of the situation, the hospital has suggested that the operation be done soon.

Although Amaiyah is ill, Barrett said that she is still a vibrant baby who feeds well and she continues to astonish everyone in respect of how long the duct has been keeping the baby alive.

“She is vibrant, she is happy. She is playful just the same,” she said.

However, whenever the Amaiyah cries, Barrett said that her skin turns blue and so she makes every effort to ensure that she does not cry.

Barrett, who gave birth at the St Ann’s Bay Regional Hospital, said that it has been a rough experience so far, following what she described as a difficult birth.

With her daughter admitted to the Bustamante Hospital for Children in St Andrew, Barrett, although still in the recovery process herself, travels to the institution from St Ann every day.

In spite of the challenges that she is now facing, the young mother remains hopeful.

Those wishing to assist Nellveita Barrett may do so by making a contribution to Scotia Account # 636573, Mandeville Jamaica.

0 thoughts on “HELP SAVE THIS BABY!”