HOLNESS TO APOLOGIZE FOR TIVOLI INCURSION 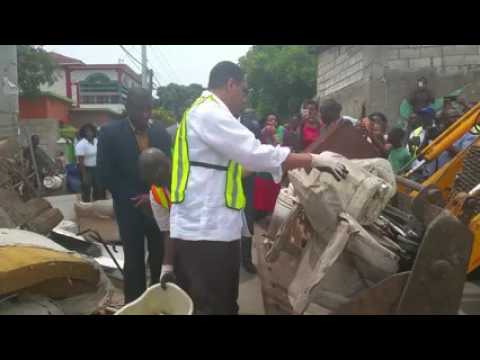 The Government is to offer an apology to residents of west Kingston over the operation by the security forces in the area in May 2010, which left dozens dead and injured and millions in damage to houses and other properties.

Justice Minister Delroy Chuck yesterday told The Gleaner-Power 106 News that the apology was being crafted, adding that “in a matter of weeks, it is likely that it is to be presented to Parliament”. The apology is expected to be delivered by Prime Minister Andrew Holness.

Making an apology is one of the 15 recommendations made to the Government by the commission of inquiry into the incursion. The 900-page report of the three-member panel, which was chaired by Barbadian jurist Sir David Simmons, was released to the public in June after being tabled in Parliament.

“With the deaths of 73 civilians and a soldier, the commission noted that a public apology is necessary in order to assuage the hurt feelings, bitterness, and resentment of the people of West Kingston, and, with a view to promoting restorative justice and bringing closure to this sorry chapter in Jamaica’s history,” the report stated.

“We recommend that the Government of Jamaica apologise in Parliament to the people of West Kingston, and Jamaica as a whole, for the excesses of the security forces during the operation. The Government is, in the last resort, responsible for the conduct of its security forces,” the report further charged.

Regarding redress, Chuck said a compensation committee is to be set up “soon” and that once that is done, he hopes that it will complete its work “in a matter of months”.

A statement issued on Tuesday by the justice ministry indicated that the Cabinet committee reviewing the report of the May 2010 Commission of Inquiry is taking steps to come up with a system to implement the commission’s recommendations.

“The committee is currently looking at structures and the management of the implementation process because while some of the recommendations are short term, such as the apology that is to be made to the residents of West Kingston, some recommendations will require extensive administrative changes and legislative interventions that will be implemented over a medium- to long-term period,” Chuck is quoted as saying.

Chuck, who chairs the committee, says the work of the body would bear in mind the objectives of the recommendations, namely, restoring and promoting trust and confidence in the State; compensating victims for property damage, wrongful death, and injuries; controlling the use of force of the Jamaica Defence Force and the Jamaica Constabulary Force; and dismantling garrisons and mitigating the conditions that give rise to them.

11 thoughts on “HOLNESS TO APOLOGIZE FOR TIVOLI INCURSION”