HUSBAND ASKS IF HE WILL EVER FORGIVE HIS WIFE LOL

Dear Taiwo,
Please, how do I handle this level of betrayal? I have been asked to forgive her for God’s sake. I have no choice but to forgive her, but is it possible for me to forget her level of betrayal?
I really don’t know. Funny enough, I can’t stop loving her; my heart is not so smart here. Despite the love I have for her, I cannot forget all she did and my state of mind is still affecting our relationship. I need your advice, how can I forget, let go and move on?
ADVERTISEMENT
I met Mosun when I was in my final year in school. I lived off campus and she was living with her aunt who was our neighbour then. Her aunty used to sell rice and other consumables to us. All students who lived in the area liked her as she was quite motherly.
Mosun, then was in the secondary school and every one in our area knew I had a soft spot for her and I have always loved her way back then. When we left school, I promised to keep in touch with her and I did. I was posted to Maiduguri for my Youth Service, I really didn’t know what happened but I learnt she had a quarrel with her aunty and she had to move out of her house and started living with a friend of hers. I suppose it was at her friend’s place that she learnt all the vices.
By the time I came back, my innocent beauty had become a changed person. I should have learnt from the change in her and take a walk, but my feelings for her didn’t allow me. I promised to take care of her and from then she became my responsibility. I was unable to get a job immediately I finished the youth service, but I made sure I spent the little I had to take care of her.
I refused to go back home to live with my parents because of Mosun, I rented an apartment and we started living together. I insisted she must return to school and I started with enrolling her at an extra-mural class so she could retake her school leaving certificate examination.
I also insisted that she should reconcile with her sister. She did, her sister thanked me for this gesture. She explained to me that their quarrel was as a result of the friends she started moving with not long after I left for youth service and that she finished her secondary school. She said Mosun insisted that she wanted to go back to school and resit for the papers she failed. She pleaded with her to give her time to raise the money, but all she did was to move out of the house to live with her friends.
Her sister was happy, because there are just the two of them and their parents are dead. She asked me what I wanted from her sister, I told her I loved her and would want to marry her after she must have finished her schooling.
Things didn’t go well as I planned, as I was unable to secure a good job in time, I however made sure that she wrote her SSCE again and passed after which I asked her to learn a vocation of her choice. She chose to learn hairdressing and I paid for her training.
It was during her training that she became pregnant. Although, it wasn’t the way we planned things to happen, but I had no choice. Since I wanted her as my wife, I decided that she should have the baby after which she would go back to school.
I was surprised at the fact that my parents were against Mosun when I informed them. My mother especially because she was of the opinion that I have not been sending money to them because of Mosun, she however failed to realise that I didn’t have a good job.
I was shocked that it was at this time that another man showed up to claim Mosun’s pregnancy. I never realised that she was also dating another man. It became a really messy deal. I was careful not to allow y parents know what was going on, because I was still working on them to accept her.
I reported the situation to her sister, she felt bitter about it, intervened and both of us were asked to wait until she had the baby. I asked her to move in with her sister with the promise to be responsible for her upkeep until the baby was born.
When my parents found out that she had moved out, they wanted to know why, I told them that she needed to so that her sister would be able to take good care of her and I also did that for them.
Mosun eventually had a baby boy who was my carbon copy. The fact that the baby looked like me and visav is like my father made my parents accept her. They asked her to return so that we would have our wedding ceremony, but Mosun refused because she claimed that I doubted her and the child’s paternity. She was the one who allowed my parents to know the reason she moved out of my house. 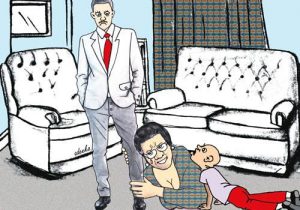 Dear Taiwo,
Everybody pleaded with her, even her sister, but she refused to come back. When her sister told her that she could no longer live with her, I don’t know how she got money but she rented an apartment and started living on her own. I had no choice but to take care of my son.
Her refusal to return and get married properly and attitude towards my parents and siblings led to another bout of problems which I had to cope with. Eight months after she delivered, she agreed to return, but my parents refused. I stood my grounds against my parents and took her back. Immediately, she got admission into a federal polytechnic and started schooling.
I got a good paid job at about this time, but I was surprised that I lost the job barely four months after I started for no just cause and I was unable to secure another job. Not that we were not able to survive, but survival was tough. I had to provide for Mosun and the baby, also pay her school fees and ensured she was okay.
ADVERTISEMENT
To my surprise, things began to get from bad to worst. I didn’t think much of it initially, but I began to give it a thought when I had to resolve to Kabukabu before I could feed my family. It was Mosun herself who brought the idea of going to consult a spiritualist. Though, I was born into a spiritual assembly, but sincerely, I gave it no thought. Because I have started worshipping in a pentecostal assembly as a result of my clash with my parents, we had to see the spiritualist that she introduced. There, I was told that my mother was the cause of my problems. These revelations further caused a rift between my parents and I, for months we didn’t see eye to eye.
During this time, instead of Mosun helping matters, she became unruly and she also started giving me problems. She would use her school lecture hours as an excuse to leave home and return at ungodly hours. Several times, she would leave our son with me and even sleep out of home.
I suspected she was dating other men, but I had no concrete evidence to nail her. On a faithful day, she slept out without prior notice. She didn’t return the following morning. I was so worried that I couldn’t go out and when she eventually came back, she had no explanation, she even became confrontational.
Her attitude infiruated me and we had our first major quarrel. I stormed out of the house so that I would not do anything in the extreme. Before I returned home, she had moved out with our son.
I later learnt that it was one of her friends who came home with her to move her things. I immediately informed her sister. She pleaded with me to take things easy that she will return home.
My supposed wife was gone for five weeks. I was worried and even my parents who really didn’t like her were worried too because they saw my state. Very early last week, exactly a week ago, I heard a knock on my door and when I invited the person in, I saw Mosun’s sister, carrying my son, almost dead; sick and frail. An elderly man followed her, then Mosun and her sister’s husband.
I was shocked. I later learnt that my son had been ill and every where she went to she was told to take him back to his father’s house. She had taken him to hospitals and spiritual houses, but he wasn’t getting better until one of her friends took her to meet the elderly man who came with them.
I learnt later that he is a spiritualist and pastor of a church and after I had welcomed them, Mosun of course couldn’t come inside, the elderly man asked my permission that she should come in. I was still dazed and couldn’t understand what was happening. I said she could. When she did, the elderly man asked her to move close to me and make her confession.
Confession? Well she did and I was dazed. I learnt she had been dating other men even while she was pregnant. She also went diabolical so that I will love her the more. The consequences of her actions are my near penury state. She knew about the consequences before she went ahead to do what she did.
It became necessary for her to confess because if she doesn’t, our son has just few hours to live. I was too shocked to react. She was asked to plead with me and that I should forgive and allow her in. I have done just that so that my son can live, but I cannot forget what she did. Though I love her so much, but I just don’t know what next, please, help me.