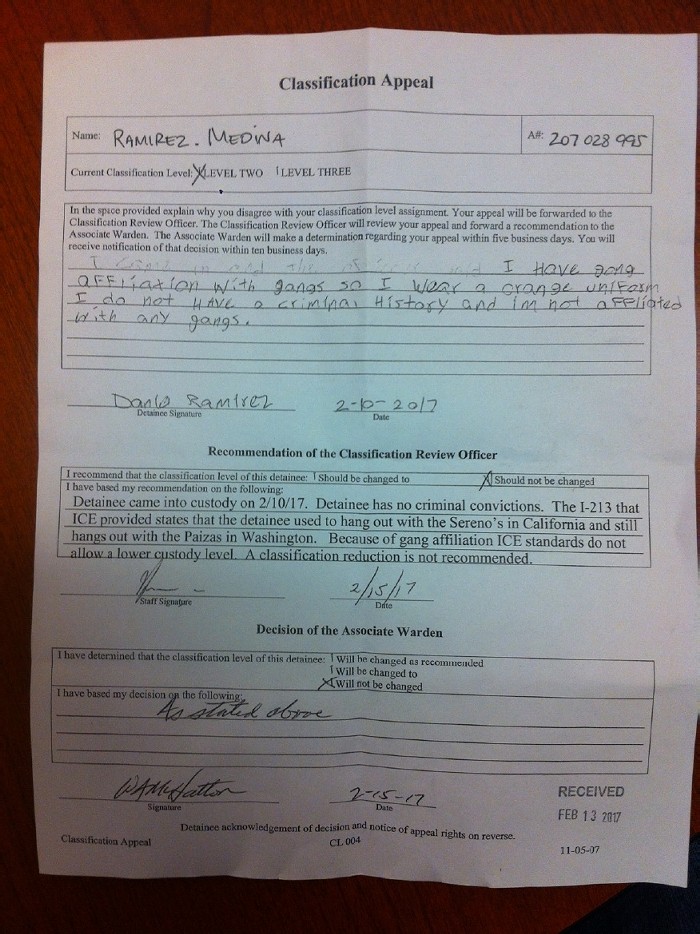 Lawyers for Daniel Ramirez Medina, the twice-authorized, 23-year-old DACA recipient who was scooped up by immigration enforcement near Seattle last week, say that government officials doctored a legal document at the Northwest Detention Center in an attempt to prove that Ramirez Medina was part of a gang.

The allegation of government misconduct is outlined in a brief filed by Ramirez Medina’s lawyers in US District Court in Seattle. The lawyers say that when Ramirez Medina—who has been detained inside the Tacoma’s Northwest Detention Center’s gang unit for a week—tried to petition to be removed from the gang unit, part of his written petition was erased.

The brief states Ramirez Medina originally wrote: “I came in and the officers said I have gang affiliation with gangs so I wear an orange uniform. I do not have a criminal history and I’m not affiliated with any gangs.”

But according to an additional declaration filed to the court, the statement returned to Medina by Immigration and Customs Enforcement (ICE) officials five days later says: “I have gang affiliation with gangs so I wear an orange uniform. I do not have a criminal history and I’m not affiliated with any gangs.”

The document filed to the court bears clear signs of erased words. (See the image above.)

“What began, I thought, as a mistake in bringing Daniel in has turned into a bogus operation that is attempting to railroad him and violate the sacred program that the DACA represents,” lawyer Mark Rosenbaum told reporters on a conference call this evening. “It is one of the most serious examples of governmental misconduct that I have come across in my 40 years of practice.”

ICE did not immediately respond to a request for comment.

After Ramirez Medina’s arrest during an immigration raid targeting a family member last week, ICE put out a statement claiming that Ramirez Medina was a “self-admitted gang member.” Ramirez Medina’s lawyers denied that their client ever said he was affiliated with a gang; they added that he had been pressured to say he was (but resisted) while in detention.

Later, the Seattle Times reported that the accusation of gang affiliation may have stemmed from a tattoo on Ramirez Medina’s forearm with a nautical star and the name of his hometown.

According to e-mails obtained by The Stranger from a source at the city, ICE has declined to meet with Seattle Mayor Ed Murray to discuss the situation and share more information about Ramirez Medina’s arrest. Tomorrow morning, a federal judge in Seattle will hear Ramirez Medina’s lawyers and the government argue over ICE officials’ justification in detaining Ramirez Medina in the first place.