I HAVE GIVEN SO WHY AM I NOT GETTING?- GOOD MORNING 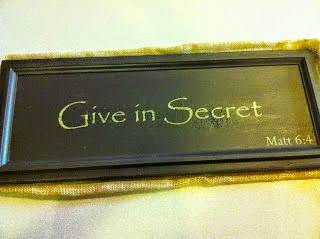 I have given, so why an I not getting?
Are you one of those people that have been giving and helping others just about all your life but for some
reason or the other nothing is being returned to you?
During these difficult economic times trying to make ends meet. It is normal to ask when will someone lend me a helping hand, especially knowing the good that you’ve done for others. This seems to be a mystery that from the surface seems hard to explain.
The bible gives clear instructions as to not only how we should give but the manner in which we should give in. However, before we get into the spiritual rules in regards to spiritual giving let me share a true story with you.
There are a few folks that I know personally but one person in particular that is by nature a natural givers. This particular person has given thousands monetarily, assisted hundreds of folks including family, friends and in some case their enemies. I would go as far as to say that this person is the personification of giving. Now, you would think that such a person would be living in abundance, right! Or at least having their needs met? Well, if you said yes they I am sorry to say you’re wrong!
Now, what I failed to mention in the above resume of my giving friend is the small fact that he loves to boast and brag about what he has done for others and always making mention how he did what he has done for others. In other words, his kindness which I truly believe is genuine is always accompanied with self aggrandizement.
You’re probably saying at this point, “What does this have to do with his receiving in return for all the giving he’s done?” Here is what the bible says about giving but before I do that let me define the word “alms” which the bible mentions in the passage of scripture we are about to get into. The word alms is defines as money, food or other donations given to the poor or needy; in fact anything given in charity.
“Take heed that you do not give your alms before men, to be seen by them: otherwise you have no reward of your Father which is in heaven. Therefore whenever you gives alms, do not sound a trumpet before others (bragging and boasting making know the goods deed you’ve done) as the hypocrites do in church and in the streets, that they may have glory of men, truly I say unto you, that is there reward” Matthew 6:1-2.
Instead scripture gives clear instructions as to how we aught to genuinely give, “But when you do give alms, let not your left hand know what your right hand has done, instead let your alms be done in secret and God which sees all things inclusive of those things done in secret shall reward you openly or where as everyone will know that you’re blessed” Matthew 6:3-4.
So you see my friend scripture has unlock this mystery in regards to those that are givers but are not receiving as they should, especially due to the amount of giving and assistance they’ve lend to others. Their boasting, bragging and sounding a trumpet of what they have done for others has become their reward. While those who have secretly assisted and given to others will be blessed publicly by God who has promised to do so.
My words of wisdom is simply this, avoid giving yourself an immediate reward by sounding the trumpet of what you have done for others. Instead, whatever and whenever you decide to give or assist others do it in secret and let God be the one to bless you openly.
Written By: Kevin L A Ewing
[email protected]
kevinlaewing.blogspot.com

0 thoughts on “I HAVE GIVEN SO WHY AM I NOT GETTING?- GOOD MORNING”