I KAINT……………BIRDMAN SEH LITTLE WAYNE IS A BMAN 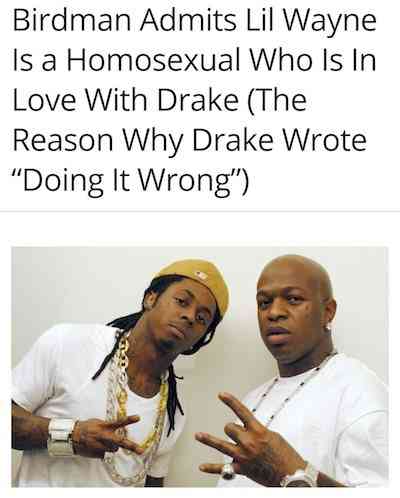 In the wake of the Lil Wayne and Birdman drama, Birdman has publicly admitted that rapper Lil Wayne is a homosexual, presuambly an attempt to ruin the image of the Young Money rapper.
After the news circulated that Birdman was holding back Lil Wayne’s “Tha Carter 5″ album for unknown reasons, Lil Wayne announced that he felt like a “prisoner” to Birdman’s label and that he wanted “out” of Cash Money Records. The feud is expected to heat even more now that it has been announced that Lil Wayne is Suing Cash Money Records for $51 Million and has asked a judge to declare him the joint copyright holder of everything released on his Cash Money imprint, Young Money, including recordings by Drake and Nicki Minaj.
Now that Birdman has admitted that Lil Wayne is actually a homosexual and that all the songs where he is speaking sexually of women is actually a cover up for his true sexuality and simply to sell his music, as women have always been popular topics for music. Birdman also revealed that Lil Wayne wanted a relationship with him and Canadian rapper Drake, and that the song “Doing It Wrong” on Drake’s second studio album “Take Care” is actually about Lil Wayne and how he cannot be in a homosexual relationship with him. ” He gay as hell”, says Birdman, “He tried to be with me, drake, and even the boy rick ross, but he was after drake more than everybody else and Drake actually wrote the song “Doing It Wrong” for him, cause he ain’t wanna be with him” finished Birdman.
Birdman has also admitted that he himself use to be bi-sexual and then realized he was actually straight as “the mind plays tricks on people”, according to Birdman. Lil Wayne has yet to respond to the homosexual accusations, boy is this feud getting worse and worse everyday. Subscribe to huzlers.com for updates on Birdman and Lil Wayne, as well as other daily shocking news.