INMATES UPDATING THEIR FACEBOOKS FROM CELLPHONES 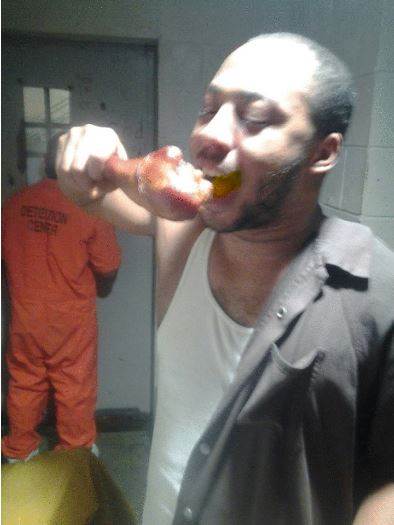 Cell phone usage is not allowed by inmates behind bars, yet a hinds county inmate and an MDOC inmate have been updating their Facebook pages while behind bars.
A picture shows a man by the name of Trilando Johnson enjoying a turkey leg with the caption that reads in part: “Who said i can’t go to the fair?”
According to the Hinds County Inmate detail list, Johnson has been behind bars since September of 2013.
His Facebook page has been updated within the past couple of days.
Hinds County Sheriff, Tyrone Lewis says there was a security breach that involves a Hinds County employee and his department is investigating.
Sheriff Lewis says they’ve confiscated a cell phone and other contraband.
The employee and Johnson face felony charges, including introduction of contraband into a correctional facility.
An MDOC inmate by the name of Trylon White is also being investigated after posts from his Facebook page.
His inmate detail shows he has been behind bars since 2002.
The Facebook page has since been deleted, but we did capture posts that shows it was last updated in September.
Officials from the Mississippi Department of Corrections say they are investigating.
They also say inmates found with cell phones can receive a rule violation and lose time off their sentence if they’re found to be in violation.

0 thoughts on “INMATES UPDATING THEIR FACEBOOKS FROM CELLPHONES”