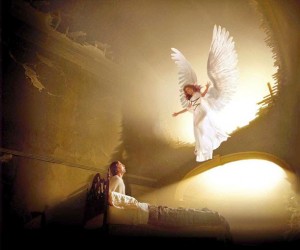 Is it an Angel of light or an Angel of darkness?
The enemy can be quite cunning as it relates to our dreams. For instance, a dream can give the
appearance of being from God. Especially in cases where folks experience Angelic visitations in their dreams or in cases of visions.
One of the key points in determining if these dreams are of God or not is to pay special attention as to what these “angels” are saying to you or instructing you to do. If by any means these angels are asking you to do anything that is contrary to scripture, then make no mistake you are dealing with a masquerading spirit that’s pretending to be an angel of light.
Scripture clearly says to us the following, “And no marvel; for Satan himself is transformed into an angel of light. Therefore it is no great thing if his ministers also be transformed as the ministers of righteousness; whose end shall be according to their works” 2 Corinthians 11:14-15.
Now isn’t that interesting? Satan and his agents have the ability to disguise themselves particularly as angels of light and ministers of righteousness, all in an effort to mislead those that lack knowledge of their ability to do so. Again, this is why it is so important to be equip with such relevant knowledge to exposes the craftiness of the enemy in our dreams and visions. God can not go against his word, so why would an angel of God be revealing your decease love one to you in a dream. Didn’t the word of God clearly say we should have no communication with the dead, which is known as necromancy?
I have met with so many folks that were delighted in revealing to me their “angelic visitation”. However, it would be later revealed in the conversation who really visited them based on the actions and conversations of the angel in their dreams.
As a reminder, angels of God are messengers of God and it is their job to reveal to us messages from God, warn of us of pending danger and to protect us from the evil one and his host. In any event whatever they do or say in our dreams must be GOD BASED!!!!!!!!
Written By: Kevin L A Ewing
[email protected]
kevinlaewing.blogspot.com
Posted by Kevin Ewing at 9:43 PM Links to this post
Email ThisBlogThis!Share to TwitterShare to FacebookShare to Pinterest
Labels: Angels
Reactions: