The United States Embassy in Kingston was lit up in the rainbow colours Thursday night to mark PRiDE Week.

PRiDE Week is being promoted by the Lesbians, Gays, Bi-Sexuals and Transgender (LGBT) community.

On Friday, the Canadian High Commission hosted the opening ceremony.

This year, the Jamaica Forum of Lesbians, All-Sexuals and Gays (J-FLAG) has organised several activities for PRiDE week under the theme, ‘The Pride of People: Celebrating a community of love’.

In June, Jamaica’s Attorney General Marlene Malahoo Forte came under pressure following a post she made on Facebook and Twitter denouncing the decision of the US Embassy in Kingston to fly a rainbow flag saying it was against Jamaican laws. 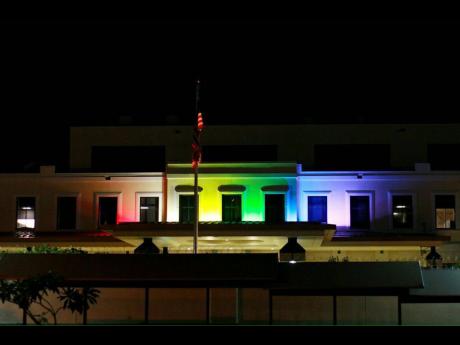 “I strongly condemn the #OrlandoNightClubShooting but I find it disrespectful of Jamaican laws to have #RainbowFlag flown here. #MyPersonalView,” Malahoo Forte posted.

The US Embassy had explained that it was in solidarity with the victims of the Orlando Gay nightclub shooting in which 49 people were shot dead by a man who the police later shot and killed.