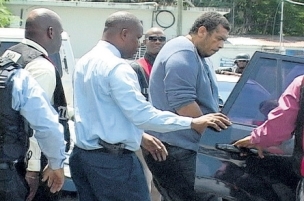 Patrick Powell leaving the Home Circuit Court last week after he was freed of murder.
The Firearm Licensing Authority (FLA) has released a statement through the National Security Ministry indicating that in 2004, businessman Patrick Powell and police inspector Patricia Primrose Powell-Wallace were both issued with a licence for same weapon – a Walther 9 milli-metre pistol.

At the same time, the FLA Powell’s file is missing from its offices.

The FLA says the last established evidence of the movement of the file was when an officer in the then CEO’s office made a request from the FLA Registry on April 14, 2015.

Powell was last week freed of the 2011 murder of the schoolboy Khajeel Mais.

SEE FULL CHRONOLOGY OF THE CASE BELOW:

* November 22, 1990: FLA Investigations reveal that Patrick Goulbourne Powell, a citizen of the United States with passport No. 454754767, with a given address of 17 Greenwood Drive, Kingston 19, was first granted a licence for a Smith and Wesson .38 revolver with serial number BFN6604 by the St. Andrew North Police. This firearm is not listed in the FLA’s database, and there is no evidence to date to determine its location or status.

*October 27, 2003: St. Andrew South Police issues firearm licence to Patrick Powell for a Glock 9MM pistol with serial No. ESS673. Patrick Powell was said to be living at 17 Oakland Avenue, Kingston 11. The ballistic signature of this firearm was not captured at that time. This firearm was last licenced by the FLA on March 31, 2011.

*April 2004: Patrick Powell and now Inspector of Police Patricia Primrose Powell-Wallace were both issued with a Firearm User’s Licence for the same firearm, a Walther 9MM pistol with serial No. FAB2400 in the same month. This information was obtained from the electronic records of the Police National Computer Centre in 2006 by the FLA.

*April 2006: The Firearm Licensing Authority established by an Act of Parliament as an agency of the Ministry of National Security.

*July 1, 2011: 17-year old Kingston College student Khajeel Mais was shot while in a taxi and dies of his injuries.

*July 11, 2011: Patrick Powell refuses to produce his firearm to the Police for inspection.

*July 19, 2011: Patrick Powell arrested and charged after again refusing to hand over his firearm and ammunition for inspection. Powell is scheduled to appear in the Half-Way Tree Court on this matter on November 18, 2016.

*August 18, 2011: FLA receives a letter from the Police Criminal Investigation Branch (CIB), requesting that Patrick Powell’s firearm licence should be revoked on the grounds that he refused to produce his firearm for inspection after written and verbal communications from the Police.

*August 31, 2011: The then FLA Board Chairman, Retired Assistant Commissioner Errol Strong requests information and documentation on the Patrick Powell case. There is no evidence in Board minutes to show that the requested information was provided to the Board.

*July 2016: The new FLA Board requests information on the Patrick Powell case from the FLA management. No information was provided.

*October 24, 2016: Patrick Powell acquitted of the murder of Khajeel Mais.

*October 27, 2016: New FLA Board demands file on Patrick Powell. It was then discovered by the Board that the file was nowhere to be found at the FLA. However, the last established evidence of the movement of the file was when an officer in the then CEO’s office made a request from the FLA Registry on April 14, 2015.

*October 30, 2016: Mrs. Patricia Primrose Powell-Wallace, the Inspector in charge of the Porus Police Station, was interviewed by the FLA. She indicated that she was already interviewed in 2011 by Assistant Commissioner of Police Ealan Powell. The FLA contacted ACP Powell who confirmed that there is no relation between Patrick Powell and Patricia Powell. She indicated that the Walther 9MM Pistol was purchased as new at either Sasso or AA Dealers, and to her knowledge, there are no subsidiary licence holders. She also stated that she did not grant anyone a permit for her firearm. The Police Officer who was in charge of the Manchester Division at that time indicated that no licence was issued to Patrick Goulbourne Powell by him. Patricia Powell further reported that she did not renew the firearm licence during the enquiry of an alleged “relationship between herself, her firearm, and Patrick Powell.”

*November 1, 2016: Ministry of National Security assigns Director of Protective Security Lincoln Allen as Acting CEO for the FLA. Mr. Allen, a small arms control policy expert, is the government officer who deals with all local and international policy matters pertaining to firearms. Mr. Allen has been mandated by the Board to clear and correct systemic weaknesses at the FLA.

The Firearm Licensing Authority is mandated to provide transparency and integrity in the regulation of firearms and ammunition used by Jamaican residents.