A 3-year-old boy was hospitalized with serious injuries and a gorilla was shot dead after officials said the boy climbed through a railing and fell into a moat at the Cincinnati Zoo’s gorilla enclosure.
A 17-year-old, 400-pound male lowland gorilla, Harambe, was shot and killed by the zoo’s dangerous animal response team about 10 minutes after the boy made it into the enclosure.
Zoo director Thane Maynard said that the boy crawled through the railing and fell into the moat just before 4 p.m. Saturday. A Cincinnati fire department incident report says that the gorilla “was violently dragging and throwing the child” when they were called.
The child was in between the gorilla’s legs when the gorilla was shot, fire officials said.
“It’s a sad day all around,” Maynard said. “They made a tough choice and they made the right choice, because they saved that little boy’s life. It could have been very bad.”
Three gorillas were in the enclosure when the boy fell in the moat. Two were called out of the enclosure immediately, but the third — Harambe — stayed in the yard.
One woman said that she saw the gorilla drag the boy from one end of his habitat to the other.
Witnesses said they saw a woman crying and that the child was conscious during the rescue.
The child was released from Children’s Hospital Saturday night. His name has not been released.
The gorilla was not tranquilized because when the animal is agitated, Maynard said, the tranquilizer may not take effect right away. This was the first time Cincinnati Zoo officials have killed an animal in this manner, Maynard said.
The zoo also said this is the first security breach at Gorilla World since it opened in 1978.
The zoo houses 11 gorillas, according to its website. Gorilla World will be closed indefinitely, but the zoo will open as usual Sunday, the zoo said.
In March, two polar bears breached security and made it into a secure hallway, but not loose in the zoo, before they were contained.
The zoo posted a video of Harambe on Facebook in January.

FULL VIDEO: Boy falls into Gorilla World exhibit at Cincinnati Zoo
A viewer shares video taken after a boy made his way into a gorilla exhibit and was drug around by one of the go…

These are the parents of the four-year-old boy whose 15-feet fall into the gorilla exhibit moat in Cincinnati Zoo resulted in the death of 17-year-old silverback gorilla, Harambe. Seen here for the first time is mother Michelle Gregg, 32, who has four children by father Deonne Dickerson, 36, a man who, Daily Mail Online can disclose, has a lengthy criminal history.
Criminal filings against Dickerson stretch over a decade and include burglary, firearms offences, drug trafficking, criminal trespass, disorderly conduct and kidnap.
In 2006 he was sentenced to one year behind bars for a drug trafficking conviction.
But in numerous pictures posted on Dickerson’s Facebook site in recent years he appears to have turned his life around to become the proud father of four.
Indeed, the majority of his postings to the social media site are updates of his children and his working life.
In others pictures he has uploaded his friends congratulate him and Michelle on the birth of their fourth child last January. Together: Michelle Gregg and Deonne Dickerson at home
Together: Michelle Gregg and Deonne Dickerson at home
Cleveland based Dickerson is from Atlanta, Georgia and studied at Cuyahoga Community College, Ohio and now works as a sorter at a Cincinnati industrial equipment supplier.
Gregg is currently the administrator at a Cincinnati pre-school.
She has been the subject of sharp criticism following the incident that saw zoo staff shoot dead Harambe who, according to new video footage, may have been protecting rather than threatening the child after he crawled through a barrier and fell into the gorilla’s enclosure.
Many social media commenters have criticized her and Dickerson and said they should be held accountable.
A Cincinnati police spokesman said no charges were being considered. A spokeswoman for the family said on Monday they had no plans to comment.
‘I do think there’s a degree of responsibility they have to be held to,’ said Kate Villanueva, a mother of two children from Erlanger, Kentucky, who started the ‘Justice for Harambe’ page and attended a vigil on Monday at Cincinnati Zoo for Harambe.
‘You have to be watching your children at all times.’ 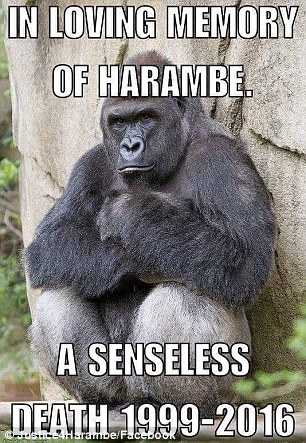 More than 115,000 people have signed a Change.org petition calling for the mother and father to be ‘held accountable for their actions of not supervising their child’.
One Twitter user wrote: ‘So a beautiful, innocent gorilla has to die because neglectful parents can’t control their kids? Mankind sucks 🙁 #Harambe #CincinnatiZoo’
Soon after the incident, Michelle Gregg, the mother of the boy, posted a message on Facebook saying: ‘I want to thank everyone for their thoughts and prayers today. What started off as a wonderful day turned into a scary one.
‘For those of you that have seen the news or been on social media that was my son that fell in the gorilla exhibit at the zoo. God protected my child until the authorities were able to get to him.
‘My son is safe and was able to walk away with a concussion and a few scrapes… no broken bones or internal injuries.
‘As a society we are quick to judge how a parent could take their eyes off of their child and if anyone knows me I keep a tight watch on my kids. Accidents happen but I am thankful that the right people were in the right place today.’
The family also released a statement on Sunday saying they had taken their boy home from the hospital.
It read: ‘We are so thankful to the Lord that our child is safe. He is home and doing just fine. We extend our heartfelt thanks for the quick action by the Cincinnati Zoo staff.
‘We know that this was a very difficult decision for them, and that they are grieving the loss of their gorilla. We hope that you will respect our privacy at this time.’
PICTURED: The parents-of-four whose son fell into gorilla enclosure