Jamaicans, keep your votes the next election because they really mean nothing . Who you elect isn’t the boss so why waste your vote?

On May 17, 2016, members if the Jamaican Constabulary Force were seen hurling a body on the back of their pick up truck. John Hibbert, a young man who they had recently killed, was chucked onto their pick up as if he had never lived before. His lifeless limbs thrown more than three times until the police felt it was in its rightful place, beside the tires, uncovered at the back of their truck.
While we must admit that some of the videos of late are distasteful, we must applaud the bravado of the person who risked their life in order for the world to see the blatant disregard for life some members of the JCF display on a daily basis. Jamaicans are treated less than animals by their own and it’s accepted because sadly, it is the norm. The norm to be beaten, chastised, ostracized, dehumanized then buried like kings and queens.

Jamaicans have migrated to just about every country there is outside of Jamaica and have made it their own, leaving tourists to wonder why. Why, run from such a beautiful sunny island to become slaves of varied ambitions else where. The bitter truth is; Its better to be enslaved by a stranger , than to your own.

Jamaica’s garrisons account for more than fifty percent of it’s populous and can be found in all fourteen parishes on the island. All garrisons are controlled by dons who have no legal right, status or claim. These dons however, have been backed by almost if not all Jamaican politicians to some degree.

Dons are given work to share amongst the people in their area, they are given supplies which may include construction material and other goods by the elected candidates to ensure they are kept or elected in office. So, for Jamaica’s politicians, Dons are the essence of their being. Without them they wouldn’t be able to put on the charade for the international, more civilized world that Jamaica has a constitution. The constitution is close if not quite similar to House Speaker, Pearnel Charles and his wig. Sir Pearnel who has difficulty hearing, when chosen by Prime Minister Andrew Holness decided to wear a wig, although the wig has no significance in today’s more modern house of representative, it makes Sir Pearnel feel a brand new sense of belonging. That is what Jamaica’s politics is about ; A sense of belonging , nothing about it is about change or recovery. It is about parading the charade.

In the garrisons as we speak Dons have delegated henchmen who carryout beatings and shootings everyday on their fellow garrison folk. The level of abuse varies between the Dons and the garrisons they control.We read about some of the abuse in the Christopher ‘Dudus’ Coke transcripts that there was a jail of sorts in Tivoli Gardens and a hole where victims were punished or killed but Dudus himself. Coke who is still today hailed as a hero and man intended to give their lives for him when then Prime Minister Bruce Golding sent the Jamaican army to capture him. Lets not forget however that Bruce himself had employed lawyers to fight the then Don’s extradition and in the end had to ask for the U.S’s help, to get that one man. Don’s are backed by politicians, influential lawyers, police and doctors alike. They have a system that is almost impossible to be demolished but people are suffering.

Three people whose lives have been affected by these dons have shared their experiences .

***Names changed and experiences written in a way as to not have these people’s identities revealed.****

‘Leona’
– ”When I lived in Garden back in the days, we were more afraid of the people who the Don liked or was related to than the Don himself. The Don could not see everything, but he had a lot of people he trusted who were nothing but trouble makers even his mother. If she did not get along with someone, or had an argument , she would report it to her son and I have seen where people were killed because of a complaint. What was worst is that there was no one trust worth to complain to. Whatever happened to you after he held court you could not even speak about it, the easiest let off is where they ban you from the community. The Don would tell you point blank to leave, most people had nowhere to go and would leave their house with their things because they were not allowed back in Garden. It was like a prison, there was someone watching everything you said or did . The best option was to go to church and ignore things there all together. I remembered them shooting my friend and in the same breath took him to the hospital , just to make sure he told them the story they told him to say.
After living abroad for some time and returning, I saw that the ‘soldiers’ increased in numbers. They openly patrolled with guns even I became fearful as someone who lived all my childhood there. Dudus was different from his father because he did not condone rape or the killing of women. He would ask them to leave, his father did not care”. 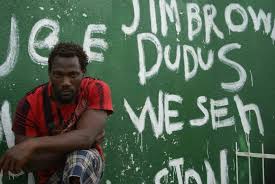 These Dons monitor who enters their community, who leaves and will even have their henchmen monitor those who have migrated, seeing to it that the send money back to their communities.

Maryiem, a young woman who was outed from her community details her ordeal.

Shawnalee a young woman whose mother was beaten for something she knew nothing about.

”My mother have six children and we all stay in our yard , we don’t go to other people yard because dat is how she grow we. Is two time we see two man wi know ina di community but dem nuh really talk to wi still. One time we hear some shuffling and we see dem standing near we neigbour fence and the second time we see dem near di pomegranate tree. Di two time dem neva see seh we could see dem because we can see dem from inside but dem cant see we from the outside.
One sunday morning dem send Rifles come call mi mother and wi never see har till di next day dung a public. She couldnt talk same time,and when she come roun she was never the same. She always a shake till di day she dead. Mummy seh Rifles tell di Don seh him neva find di gun dem bury ina we yard and dem send fi har and did a beat har till she tell dem whey dem deh . When dem beat har she tell dem seh is two time she see Doos and him fren dem come ina di yard and one a di time dem was by di pomegranate tree. Miss is suhcums dem send dem back go look fi di gun dem and dem put mummy ina taxi drop har off a public. Dem ah some cold people.

Di likkle yute Dunstan from roun di road ina election time pass bout four people yard and write J.L.P pan di sidewalk. One a di lady dem go tell him father and him get bout four kick from him and before di fifth kick reach him, di Don sen him man dem fi di father and beat him fi mek him son do dat. Him did have to leave and come back after di election. Dem man serious dem don’t play like dat.

A report to the police could mean death for many of these people, yet these killers/Dons are friends with Jamaica’s top politicians, so just who is in charge? Politicians give these Dons contract on cue.