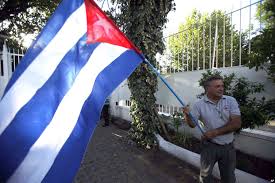 The House of Representatives has unanimously approved a motion calling for the lifting of the economic, commercial and financial embargo against Cuba by the United States.

The motion, which was brought to the House by Attorney General, Marlene Malahoo Forte, is in support of a resolution submitted by Cuba to the United Nations General Assembly (UNGA), entitled ‘Necessity of ending the economic, commercial and financial embargo imposed by the United States of America against Cuba’.

It seeks to provide support for the complete removal of the restrictions imposed on Cuba for more than 50 years despite the fact that 191 member states of the UN, including Jamaica, representing the vast majority of the international community voted last year in favour of the resolution.

The Jamaican legislature has approved a motion in support of the lifting of the embargo for the past eight years.

In her remarks, Malahoo Forte said the blockade continues to hinder the normalisation of relations between the two countries, noting that it also goes against many charters and norms governing international trade.

“The blockade is the most unjust, severe and prolonged system of sanctions ever imposed on any country, and it remains a flagrant and systematic violation of the human rights of the Cuban people,” she said.

She said it constitutes the greatest obstacle to developing the full potential of the economy and well being of the Cuban people and to the island’s economic trade and financial relations with the US and the rest of the world.

Malahoo Forte noted that while there has been relaxation of a few rules regarding telecommunication, trade, remittances, travel, the reopening of embassies and the visit of President Barack Obama to Cuba, which was a positive move towards the re-establishment of bilateral relations, more still needed to be done.

Opposition spokesman on Foreign Affairs, Dr Morais Guy, said that the blockade has created undue hardship for the Cuban people and economy.

He added that it has also created barriers for other countries wanting to trade with the island nation.

Dr Guy noted that Jamaica and other Caribbean countries have been the beneficiaries of Cuban kindness, since the 1970s.

“We, as a country, have turned to Cuba to provide doctors and specialist nurses. Our other nearest neighbour, Haiti, when hit by Hurricane Georges in 1998 had the support of Cuban doctors, who went to assist in the relief efforts.

“In 2010 when there was the massive earthquake, more medical specialist were sent and even after Hurricane Matthew hit that country last month, Cuba sent another 38 doctors, who specialise in disaster management, to Haiti,” he pointed out.