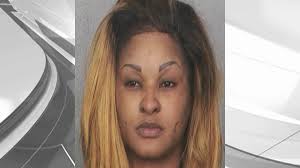 Jamaican KathyAnn Ferguson arrested for hiding cocaine in her vagina.
News reports out of Florida state that Ferguson was on a JetBlue flight coming from Montego-Bay Jamaica that landed around 4’30 pm on Sunday October 26,2014. Officials say they were prompted to do a second security search where Ferguson admitted to a Customs and Border Protection officer that she was hiding cocaine in her vagina.
The young woman removed the 175g package voluntarily from her vagina and it tested positive for cocaine.
Ferguson was taken to a hospital for further medical attention before she was booked into the Broward Main Jail. She has been released on a $15,000 bond, jail records show.

0 thoughts on “JAMAICAN, KATHYANN FERGUSON HID COCAINE IN HER PRIVATES”