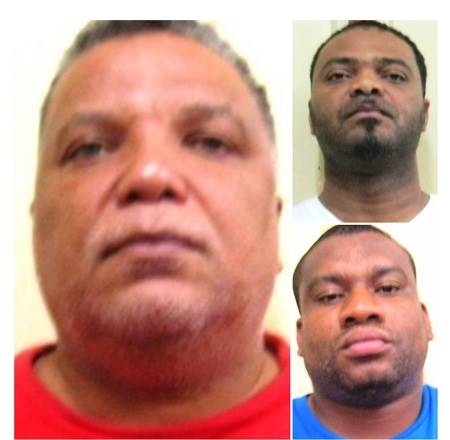 The Police on Wednesday arrested and charged three Jamaican nationals involved in a massive ATM Scam on the island.David Thomas 36, Damian Tomlinson 33, and Nicholas Grant 56 all of Jamaica were jointly arrested and charged with Twenty-five counts of Obtaining Money on Forged Instruments; Twenty-five counts of Larceny, and for Being in Possession of Forged Instruments to wit Twenty-nine Debit/Credit Cards.

The big breakthrough came right after officers attached to the Criminal Investigations Department, acted on information of a widespread ATM Scamming operation carried out by the trio.

It is alleged that the men went on rampage throughout the island installing certain Electronic Recording Devices on several ATM’s, in order to capture critical information from ATM users.

The men in turn used the information to hack into a number of customers accounts and stole an undisclosed sum of money.

The police probe led a team of CID Officers and members of the Police Rapid Response Unit to their Jolly Harbour Apartment, where Search Warrants were executed on the premises and several pieces of evidential materials were discovered.

The items were seized and the men arrested taken into custody.

Since the incident, the police have also received reports from two other countries within the region that suffered Hundreds of Thousands of Dollars’ worth of loss, through similar ATM Scams.

However, it is unclear whether or not the men charged are in any way linked. The offences took place at ATM’s located at Jolly Harbour, High Street, Townhouse Mega Store and Old Parham Road, sometime September 28th and October 3rd, 2015.

0 thoughts on “JAMAICANS HELD IN ANTIGUA FOR CREDIT CARD SCAMMING”

104 Users Online
Back to top