Papers prove Japan forced women into second world war brothels, says China
Some historians believe as many as 200,000 women were sent to frontline to be sexually abused between 1932 and 1945 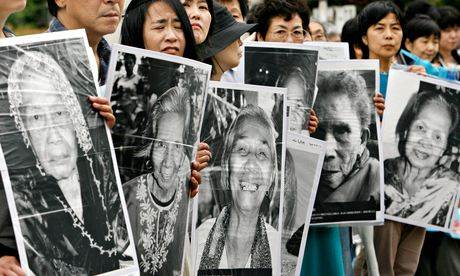 China has released documents it claims offers “ironclad proof” that the Japanese military forced Asian women to work in frontline brothels before and during the second world war.

Almost 90 documents from the archives of the military police corps – part of Japan’s Kwantung army, the occupying force that propped up a puppet regime in Manchuria in the early 1930s – include letters from Japanese soldiers, newspaper articles and military files discovered in the 1950s and kept at the Jilin provincial archives in north-east China. Documents from the regime’s national bank were also included.

“Going through the bloodiest parts of these archives, many of us experts have succumbed to chronic depression,” said the archive’s director Yin Huai, according to the official China News Service.

Zhao Sujian, 81, an archive employee since 1948, said that the documents were discovered by a People’s Liberation Army unit in November 1953. The soldiers were digging near the remains of the Japanese base to lay pipes and fix electric cables when they stumbled on the buried cache.

“At the time, these documents filled an entire truck,” he told the news service. “Because they were buried for so long, most of them were stuck together, even rotted into one mass.”

The archive in Changchun, the provincial capital, began systematically analysing the documents in 1982, after it received them from a local law enforcement office. Most remain untranslated. Research has been slow, state media said, owing to the poor quality of the documents and a dearth of Japanese-speaking researchers. 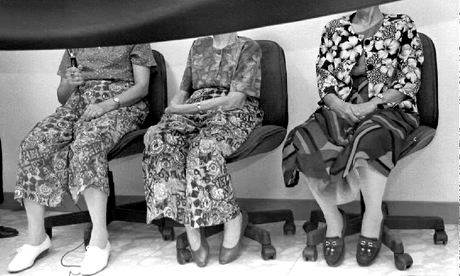 It was not immediately clear why the body had chosen to release the documents this week, but Chinese state media speculated that the publication was in response to repeated claims by conservative politicians that the women were not coerced by government authorities or the military.

Some historians believe that as many as 200,000 women – most of them from the Korean peninsula – were forced to work in frontline brothels between 1932 and 1945.

The 25 previously confidential files relating to sex slaves include reports, telephone records and documents mentioning the sexual enslavement of women, according to Chinese media.

Other documents give details of the Nanking massacre, in which Japanese soldiers killed as many as 300,000 people during their 1937-38 occupation of Nanking [now Nanjing], according to Chinese and western historians.

Japan disputes the number of deaths, while far-right commentators in Japan have accused China of fabricating the slaughter.

A 1944 telephone record taken from the national bank of Manchuria shows that the Japanese imperial army spent 532,000 yen on setting up so-called comfort stations, according to the Global Times.

Other records show how the Japanese army abducted women from the Korean peninsula and forced them to work in occupied China, with brothels eventually appearing in 20 to 30 counties in the country’s north-east.

“We can see from this file that the Japanese military made use of the national general mobilisation act to forcibly conscript Korean comfort women,” Zhao Yujie, a research fellow at the Jilin provincial archives, told Reuters. “And these Korean women were basically dispensed to high-ranking officials.”

One of the released documents records the number of women sent to have sex with Japanese soldiers in certain parts of occupied China over a period of 10 days from 1 February 1938.

In Nanking, for instance, there were 141 women and 2,500 Japanese soldiers. “That is to say, one woman had to be tortured 178 times within 10 days,” said Su Zhiliang, director of the China research centre on comfort women.

“The archives of Kwantung army unveiled this time and other times showed clearly that Japanese military and government implemented sex slavery in the army. The mechanism was influential and forcible. It was against the personal wills of these women. Second, it was widely adopted,” Su said.

The release of the documents comes soon after Barack Obama called the use of comfort women a “terrible violation of human rights”.

Japan sparked anger in China and South Korea this year when it said it would re-examine a 1993 statement in which Japan acknowledged for the first time the military’s role in forcing women into sexual slavery, and apologising to those who “suffered immeasurable pain and incurable physical and psychological wounds”.

Public figures seen as close to the prime minister, Shinzo Abe, added to tensions between South Korea and Japan with claims that Japan was being unfairly singled out for criticism of its wartime conduct. Abe has since said he does not intend to alter the statement, which has been upheld by successive Japanese administrations since it was issued by then chief cabinet secretary Yohei Kono.

A reminder of the war’s enduring role in souring Japan’s ties with China and South Korea came on Monday, when a member of Abe’s cabinet visited Yasukuni, a shrine in Tokyo that honours 2.5m Japanese war dead, including 14 leaders convicted of class A war crimes by the allies.

The visit by Tomomi Inada, a state minister in charge of administrative reform, came days after almost 150 Japanese MPs made a pilgrimage to the shrine, which is viewed by Beijing and Seoul as a powerful symbol of Japanese militarism.

Speaking in Seoul at the weekend, Obama called on Japan to give a full account of the sexual abuse of women by its military. “This was a terrible, egregious violation of human rights. Those women were violated in ways that, even in the midst of war were shocking,” he said.

Japan has refused to directly compensate the women, saying all claims were settled by a 1965 bilateral treaty that normalised diplomatic ties. In 1995, Japan set up the privately run Asian women’s fund, which drew on donations, but many women rejected any redress unless it came directly from the Japanese state. The fund was disbanded in 2007.

During Obama’s visit to Tokyo last week, Abe said Japan regretted the pain it had caused in the past, particularly in Asia. On Sunday, Abe told reporters the plight of the comfort women was “heart-wrenching”.