JUDGE SAY FIND HIM GUILTY INDIRECTLY….HE DID NOT DENY THE VOICE NOTES HAHAHAHA 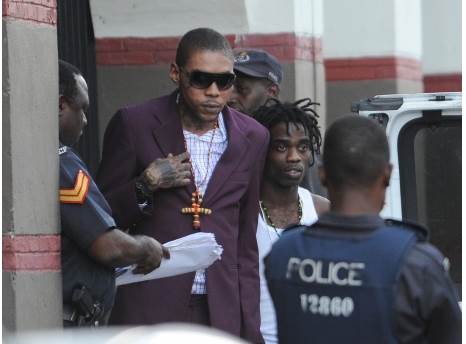 Attorney-at-law Tom Tavares Finson this afternoon moved quickly to defend his client after Justice Lennox Campbell told jurors that entertainer Vybz Kartel did not say in his defence that the voice notes played in court were not his voice.

Tavares Finson reminded the judge that the defence had been saying that the voice notes were manipulated and spliced.

Justice Campbell was making his summation to the jury when he made the observation.

They have been on trial since November last year for the murder of Clive ‘Lizard’ Williams.

The Crown is alleging at the trial in the Home Circuit Court that Williams was beaten to death at Kartel’s house in Havendale on August 16, 2011 over two missing guns.

Meanwhile Campbell has cautioned the 11-member panel not to bring external matters in their consideration because their resolve was to do justice according to law.

The judge said they would have to determine first if Williams is dead.

He said if they found that he is not dead then that is the end of the matter.

He said if they determined Williams is dead they must also consider whether the men on trial had killed him.

He will continue his summation tomorrow.

0 thoughts on “JUDGE SAY FIND HIM GUILTY INDIRECTLY….HE DID NOT DENY THE VOICE NOTES HAHAHAHA”