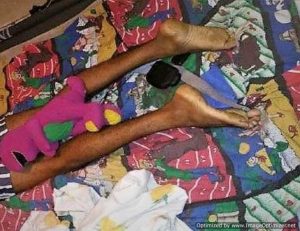 TWO men were shot dead in their beds in separate attacks early Thursday.

The deceased were identified as Sheldon Campbell, of Laventille, and Winston Joseph, of Santa Cruz.

Residents of Canada Plannings Building A told police they heard explosions and went to check on him in his apartment.

He was found unresponsive on a mattress with multiple gunshot wounds. Whoever killed Campbell tossed a stuffed “Barney the Dinosaur” on his body before leaving.

One live round found on the floor was retrieved by police.

Police said Campbell was known to them.

Deceased Winston Joseph was said to be a member of the Unruly Isis gang.

The killings took the murder toll to 151.