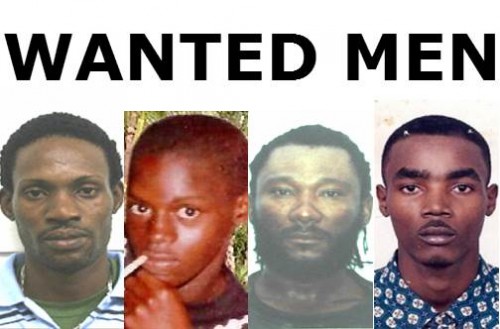 KINGSTON, Jamaica — The police have listed five individuals they say are wanted in the Kingston and St Andrew Divisions.
The men, wanted in connection with several crimes are:
• Thirty-three-year-old Gregory Anderson, otherwise called ‘Jooky’ and ‘Gaza Man’, of Mark Lane, Kingston. He is of brown complexion and slim build;
• Lynford Headley otherwise called ‘Rennie Mackie’, he is of brown complexion and sports a dreadlocked hairstyle;
• Samuel Watson, otherwise called ‘Sam’, of Ferguson Drive, Riverton City, St Andrew. He is of dark complexion and has a scar on his mouth;
• O’neil Ferguson, otherwise called ‘Shower’, of Madison Avenue, Kingston 2; and
• Kevin Perry, otherwise called ‘Keh-Keh’, who frequents Old Harbour in St Catherine and Grants Pen and Ackee Walk, St Andrew. He is of dark complexion, medium build and is believed to be in his mid-twenties.
The police is warning the public that harbouring these individuals is a serious offence and anyone knowing their whereabouts is being asked to contact the Police at 119, Crime Stop at 311 or the nearest police station.
No photograph of Kevin Perry was available at the time of publication.
ADVERTISEMENT