IT’S been years since some residents of the inner-city community of Rema in St Andrew Southern have been waking up to the unpleasant sight and smell of raw sewage settling in their backyards and seeping into their houses.

Now they are tired of it and are calling for the intervention of Minister of Local Government and Community Development Desmond McKenzie, since efforts to get help from the local representatives in the People’s National Party (PNP) stronghold have so far failed.

“A long time wi a face dis, but dem seh dem ago fix it and all now. It look like a politics… a politics mek wi a suffer,” declared one resident, who gave her name only as Shaneka. She said that most of the people who live in the problem area are supporters of the ruling Jamaica Labour Party.

“Check the smell and look at the sewage. When adults can’t can manage it, the children can’t deal with it also as fi dem immune system weak,” Shaneka told the Jamaica Observer on Friday, noting that she has been forced to take her two young children to the doctor on several occasions because of infections caused by the unhealthy environment. 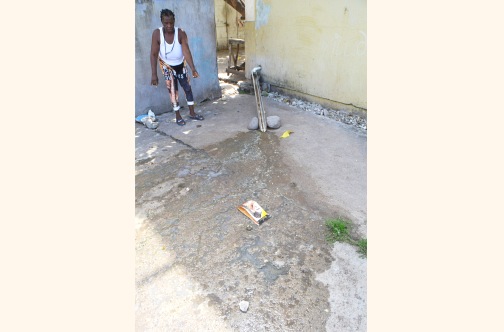 “We need help, but dem nuh business wid we, ‘cause a nuh dem a face it and dem inna fi dem uptown house weh nice and luxurious. Only time dem business wid we is when dem want wi hand fi dip inna ink,” Shaneka said.
She said residents have been living with the problem for over 20 years, and the sewer pipes have badly deteriorated and need fixing.

She said the drains get clogged easily, and when they do the sewage flows over and settles in residents’ backyards. She said residents, most times, have to pay to clean the area.

The sewage also backs up into people’s toilets, especially those of residents like herself who live on the ground floor of the high-rise buildings.

“When dem flush, everything come down on me, everytime me haffi a clean,” she explained.

“A bout six months now mi nuh cook, because if mi cook it come in like a [filth] mi a cook even though mi close mi window,” she said. “Mi have a AC and a one year now mi cyaan use it because of the smell.”

Added to that, the area has been without running water for approximately seven years, and the residents said that they are perplexed as to why the National Water Commission disconnected their supply.

“When people want water some haffi go across the road or go up a Seventh Street and some go down a May Pen Cemetery,” Shaneka told the Observer, pointing out that residents are forced to fetch water from a ‘spring’, which is next to a huge garbage heap on the main road.

Similar sentiments were expressed by Daphne, an elderly resident.

“It bad, it bad, and sometime the children get so sick,” Daphne said. “Mi would a like something to be done now, too long now wi haffi a go through dis.”

“About 20 years now it stay suh; and so the sewage choke and wi clear it, a suh it come back,” she complained.

Daphne said she, too, has been unable to use her toilet for months now because whenever she does her bathroom is flooded.

Another resident, Faithlyn, pointed to several drains in the housing scheme that were covered with sheets of zinc. She said the drains were breeding sites for mosquitoes and attracted swarms of flies.

“A di mercy of God keep Rema people from disease,” she declared, before lamenting the poor political representation in the area.