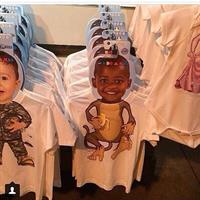 Clothing line controversy after monkey’s body is matched with African-American boy’s face
Posted on 7/10/2014 7:18:00 AM by New York Daily News
A children’s clothing line is coming under fire after a T-shirt featuring a monkey’s body was paired with a cardboard cutout showing an African-American boy’s face.
The controversial combination seen in a photo uploaded to Twitter Wednesday is now creating ire and has prompted a quick defense by the company, Just Add A Kid, which is chalking it up as “a total misunderstanding.”
“We are looking into all the situations that occurred around this little incident,” company co-creator Lowell Cohen told the Daily News by phone. “We’re looking at the vendor, we’re speaking to our employees.”
The T-shirts designed by the clothing line feature cartoon character bodies ranging from surfers, cowboys, princesses, angels and various animals and occupations. In a later statement, the company said the pairing was “not authorized, condoned or tolerated” by the company.
“The head shots on our hangers are intended (to) reflect the different cultures of our happy customers, and are distributed separately to our shirts,” the company said in the statement. “In this particular case, one of our retailers paired a particular hanger with a shirt without consideration for how it may appear to many consumers.We are taking steps to prevent this from happening again.”
It appears to ultimately be each vendor’s decision in how they pair the cardboard faces — featuring various ethnicities — to the designs.
“Our designs feature multicultural skin tones and appropriately matching header cards (to) showcase children of the world,” the company posted on Twitter Wednesday.
Just Add A Kid is one of the lines owned by the San Diego-based Thanks a Million, Cohen said.