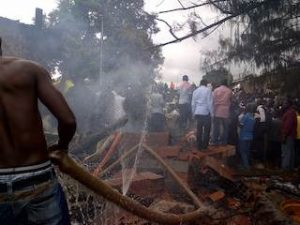 “This is a remote location, far from any possible landing sites. It is therefore with deep sadness and regret that I must inform you that, according to this new data, flight MH370 ended in the southern Indian Ocean,” a somber Razak said during a media briefing.

The jet vanished on March 8 with 239 people on board after it took off from Kuala Lampur bound for Beijing.

Get All the Latest Updates on the Vanished Malaysia Airlines Plane

The announcement follows weeks of searches that spanned the South China Sea, Strait of Malacca and finally the south Indian Ocean off of Australia as authorities tried to figure out what happened to the plane.

The new information came from British satellite maker Inmarsat, which used a new type of analysis never before used to try and pinpoint the plane’s last known location, Razak said.

“[Inmarsat] has been performing calculations on the data using type of analysis never before used in an investigation of this sort and they have been able to shed more light on MH370. Based on the new analysis, Inmarsat and the [British] Accidents Investigation Branch have concluded that MH370 flew along the southern corridor and that it’s last position was in the middle of the Indian Ocean, west of Perth,” Razak said.

He noted that Malaysia Airlines had already been in touch with the families of the 289 people on board, saying that he knew the past few weeks had been “heartbreaking” for them and that this latest development must be harder still.

The airlines sent a text message to the families, who reacted to the grim news by screaming and crying knowing that their loved ones likely died in a crash.

“Malaysia Airlines deeply regrets that we have to assume beyond any reasonable doubt that MH370 has been lost and that none of those on board survived. As you will hear in the next hour from Malaysia’s Prime Minister, we must now accept all evidence suggests the plane went down in the Southern Indian Ocean,” the message read.

Earlier today, an Australian plane spotted two objects described as gray or green and “circular” as well as orange and “rectangular” in the search area off Australia’s coast.

Other search crews had spotted “suspicious objects” in the Indian Ocean over the weekend — including items believed to be wooden pallets. The Malaysian government said that the missing Boeing 777-200 had been carrying wooden pallets, were not yet sure whether the pallets matched.

Despite the extensive multinational search, no wreckage has been recovered.

Investigators are still trying to determine what happened to the plane after it took off around midnight from Kuala Lumpur, Malaysia, headed for Beijing, China. It disappeared off the radar shortly after 1 a.m. but continued to fly, according to satellite data, for up to seven hours.

Malaysian authorities are considering the possibilities of hijacking, sabotage, terrorism or issues related to the mental health of the pilots.

0 thoughts on “MALAYSIAN AIRLINES PLANE ENDED IN THE INDIAN OCEAN”