Wade Drummond is a broken man.

Tears flowed freely down his face as he recounted his life of arrests, acquittal, imprisonment, battle with the United States justice system, deportations to Jamaica, and his current existence in penury.

Now, he wants only two things — a job, and for the US Government to clear his record as he insists that he was the victim of a fraud brought upon the court.

Drummond, who is now 49, said he was 17 years old when he emigrated to the US in May 1984 on a petition filed by his uncle in New York. 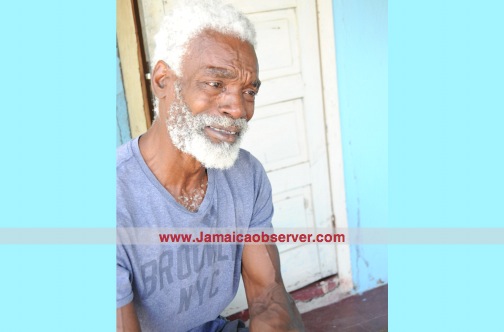 He told the Jamaica Observer that in 1988, while in Texas, he committed an offence and pleaded guilty to possession of cocaine. The volume, he said, was 28 grains, and given that it was his first offence he was sentenced to four years’ probation.
“In 1996, the court set aside that conviction, stating that it should not be used against [me] in any procedure ,” he said.

Eventually, he returned to New York, settled down and started a family. But on May 29, 1997 his life started to take a plunge. His wife accused him of threatening to harm her and called the police, resulting in him being charged with menacing.

Two months later, on July 9, he was arrested for unlawful imprisonment and criminal contempt after his wife, during a domestic dispute between them, called the police. “When they came they claimed that I held my family at gunpoint,” he explained.

A July 10, 1997 New York Daily News report of the incident stated that the police responded at 2:00 am to a report of a domestic dispute at 327 Eastern Parkway. “A woman answered the door and told police there was no disturbance, said police. But Wade Anthony Drummond, 36, was holding a cocked revolver to his wife’s head, police said. ‘She told us nothing was wrong, but we didn’t know her husband had a gun to her head,’ said police. For the next four hours, he held her hostage while their three crying children cowered in their bedroom, police said,” the newspaper reported.

“At 6:00 am, the wife got free and ran to the Franklin Avenue subway station and screamed for help. Transit workers called cops, but by the time cops arrived, Drummond had fled, police said,” the Daily News also reported.

According to the newspaper report, Drummond had violated an order of protection by being in the apartment.

But Drummond, in an interview with the Sunday Observer, denied holding a gun to his wife’s head. He also said he wasn’t aware of the protection order until he went to court following on the argument he had with his wife when he went to the apartment to pack his belongings with the intention to leave.

“I was packing up some things from my chest of drawers. I saw her and the baby dem inna the bed and I was talking to myself saying, ‘Look at life, look how long, look how much years and it just gone like dat,’” he told the Sunday Observer. “She wake up and seh: ‘Yuh come in here with it?’ I said I don’t come in here with it, just gwaan go sleep, don’t wake the kids, please. Don’t mek nuh noise, mi a leave outta yuh life. Just leave mi alone. I was calm.”

He said when he went to court the judge asked him why he disobeyed the court order. “I said ‘What order? I don’t know what you’re talking about, your honour’.

“The judge said the court issued an order directing me to stay away from the complainant.”

He said he told the judge that he wasn’t served with the order. That resulted in the judge issuing a temporary protection order for 30 days.

But his troubles started to mount as two police officers who were responding to the domestic dispute call crashed on their way to the apartment.

The New York Daily News reported officials as saying that officers Madeline Lawrence and Dwayne Barnes, both assigned to Emergency Service Unit 8 in Queens, were racing down Penn Street at Marcy Avenue toward Eastern Parkway responding to the 6:00 am call when they were broadsided by a car. Barnes suffered neck and back injuries; Lawrence had a broken leg and back injuries, while the driver of the passenger car suffered minor injuries.

According to Drummond, the prosecutor sought to have him charged in relation to the accident, but the judge threw that out. He said that while he was found guilty of the May 29 menacing charge, the jury found him not guilty of unlawful imprisonment and criminal contempt. However, the state prosecutor introduced his Texas conviction, although it was set aside, resulting in him being deported in 1998.

“At the time they deported me, they said I could come back at any time. I asked them how come, and they said I’m the luckiest one,” Drummond related.

He said that after spending two months and two weeks in Jamaica, he booked a flight to Florida, making sure to take his green card with him. “They stopped me in Florida, ran me through the system… which stated clearly that the deportation was unofficial and I needed to go back to Immigration for them to rectify it,” Drummond said.

But when he went to the immigration authorities, he was detained. “It took them 56 days before they came and filed a charge against me for illegal re-entry,” he said. “They filed it three times in the Immigration court, which rejected it and asked the Government to release me because there was no ground for deportation.

According to Drummond, the Immigration authorities then went to the US Marshal to press the charge. That, he said, resulted in him being sentenced to 77 months in prison and was eventually deported again in 2007.

“This time, the state Immigration court decided to effect deportation by claiming that they now have a valid reason, that is the illegal re-entry conviction, and again, the drugs conviction,” he said.

Drummond, who keeps a large pile of documents relating to his case, said he represented himself at all his court appearances as he had no money to retain an attorney. He is convinced that all his appeals have been denied and he has been made to suffer because of those factors, as well as his belief that he showed up what he said were flaws in the justice system.

“They (the police) were not chasing me, I wasn’t running, I wasn’t driving. New York is punishing me for that,” he said of the crash in which the two cops were injured.

His trial, he said, subjected his mother to such a high degree of stress that she died in 2014.

Asked whether he hopes to return to the US, Drummond said no.

“I’m not fighting to go back to the United States. I want the record to be corrected because you cannot send a man to prison for something a jury found him not guilty of,” he said. “That’s what hurts more than all. It’s not the deportation that hurts me, it’s the way they conducted the deportation.”

“I cry day and night when I remember my children. Even if they don’t want to see me today, I want to see them,” he said, his voice cracking.

“Look at how I’m living… I have a driver’s licence; I can’t get a job here,” he added, the tears now spilling from his eyes. “I went to Montego Bay, I went everywhere, but when people learn that I’m a deportee… it’s not pretty what I’m going through. Some days I don’t even have anything to eat,” said Drummond unable to control his tears.

“Sometime mi jus siddung an ask God a wah? Mi nuh frighten fi dead. The only thing mi worry about is to go crazy, eat outta garbage pan, walk naked. That’s what worry me, nothing else, because the amount a things they put me through is like death is nothing to me. I embrace it because mi nuh si weh mi a live fa.

You take away my life, my love, fi what? If the Government did do it justified, I wouldn’t feel like this. Tears wouldn’t come at my eyes. I have loved ones that I lose and want to see,” Drummond cried, adding that he has no animosity towards the US Government.

“I’m not a lazy person. I build a fowl coop to raise some chickens and I can’t even buy chickens,” he said, and pointed out that he started burning coal to make a living, but his foot got burnt in a mishap that has affected his ability to continue that activity.

“If mi even get a likkle work, the people dem mash mi up. I tell you, if death come to me I embrace it. I never feel like this in my life. The hurtful thing is that I prove the fraud on the court. It took me three months to do the research and get all the documents and present it to the court. It hurt, man, it hurt,” Drummond said.