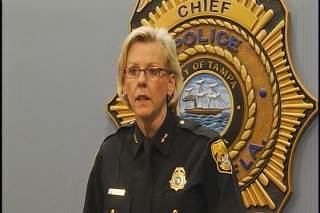 TAMPA —
A family of four was hospitalized after ingesting meat laced with LSD bought from Wal-Mart on Monday, Tampa police said.
Tampa Police Chief Jane Castor said during a news conference on Thursday that the family, including a pregnant mother, her two children and her boyfriend, started experiencing hallucinations, dizziness, rapid heart rates and difficulty breathing shortly after dinner.

The Hillsborough County Medical Examiner’s Office determined the family consumed bottom round steak bought from a Wal-Mart located at 1505 N. Dale Mabry in Tampa, which was contaminated with LSD.

Investigators said shortly after dinner on Monday, 24-year-old Ronnie Morales felt sick and called 911. He was feeling so ill that his girlfriend drove him to St. Joseph’s Hospital.

When they arrived his girlfriend, 31-year-old Jessica Rosado also became ill and was rushed across the street to St. Joseph’s Women’s Hospital where they induced labor, as she was 9 months pregnant.

Both children and Ronnie Morales received tracheal intubation and were hospitalized.

A manager from Wal-Mart said it’s unclear when and where the meat was tampered with. The remaining bottom round steak was pulled from the shelves.

Investigators took possession of the food items for testing. They also took the family’s oven for testing.
“We have no information to indicate this is anything other than an isolated case,” said Castor during the news conference.

Police are still trying to figure out how the drug ended up in the family’s meal.

At this point, police say it is not clear if a crime has occurred.

Toxicology tests on samples from the family members are pending. Results are expected in the next three weeks.

Detectives said Wal-Mart has been very cooperative with the investigation and voluntarily turned over all meat of that type that was on their shelves at that time.
The following statement was released from Wal-Mart Spokesperson Dianna Gee:

“Like everyone else in the community, we are deeply disturbed about this situation and are taking it very seriously. We want answers and we’re committed to working with officials to get to the bottom of this.

We know our customers expect safe, quality food and we require our suppliers to meet the highest of food safety standards.

It’s unclear where and how the food was tampered with or if the tampering occurred after purchase. However, out of an abundance of caution, we have pulled the remaining product from the store.

We have been in touch with our supplier and they tell us they have no reports of similar incidents.

We are reviewing our store’s surveillance video to see if we can find any information that might assist in the investigation. At this point, we’re not aware of any suspicious activity.”

0 thoughts on “MEAT LACED WITH LSD”