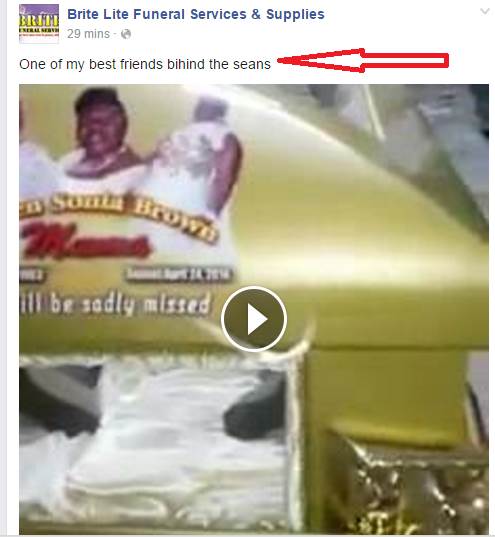 I for one accept and agree that everyone is well entitled to make a living via legitimate means so let me declare that before I’m misunderstood. ‎The thing is I pass by Tommy britelite funeral parlour base downtown and got to thinking! Out of all the professions by which to make a honest bread,the most despicable one by far must be a funeral director.

Think abt it Met,they make their living hoping and praying that ppl die,the more the better and so it hardly matters how they Die via sickness or a bullet so long as they Die.Now how frigg up and sheg up is that?? I’m addressing Tommy becuz I’ve heard he is a good yute and one who you can reason with so herego my message. Why with all the crime and violence in Jamaica you ain’t never seen or heard funeral home ppl protesting/placarding that too much ppl a Dead??Tommy can you plz encourage the ghetto yutes to puddung the gun and stop killing off them one anneda?

I know it means less profit for you and you are a businessman but it is just that we know ghetto yutes particularly in south and west Kingston rate yuh so maybe they will tek talk from u boss.I look forward to a better Jamaica as evidenced when funeral directors will protest and call for an end to the senseless killings!

8 thoughts on “MESSAGE TO BRITELITE”