MILITANTS HAVE TAKEN OVER 200 GIRLS IN NIGERIA 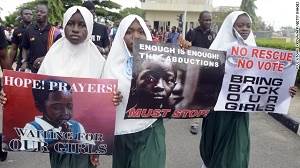 CNN anchor Isha Sesay will be live from Abuja on CNN International, Monday to Thursday at 5, 7, 8.30 and 9 p.m. CET.
(CNN) — More girls have been kidnapped in Nigeria, village residents told CNN, saying that armed men in vehicles abducted eight from Warabe village, which is in the northeast of the country. The Reuters news agency is reporting the kidnappings, citing an unnamed police source and a Warabe resident.
Residents said the gunmen moved from door to door late Sunday and took the girls, who are between 12 and 15 years old.
The latest abductions come amid international outcry over the April 14 kidnapping of hundreds of girls by the Islamist militant group Boko Haram.
On Tuesday the United Nations human rights chief blasted Boko Haram and sent a stern warning to the terrorist organization that U.S. officials say is trained by al Qaeda affiliates. Under international law, slavery and sexual slavery are “crimes against humanity,” she said, according to a statement from Rupert Colville, the spokesman for U.N. High Commissioner for Human Rights Navi Pillay.
London joins campaign for kidnapped girls Kidnapper: I will sell them in the market
Nigerians protest over kidnapped schoolgirls Nigerians protest over kidnapped schoolgirls
Map: Where the girls were kidnappedMap: Where the girls were kidnapped
“The girls must be immediately returned, unharmed, to their families,” the statement urged.
Since Pillay visited Nigeria this year, Boko Haram’s actions have “grown increasingly monstrous,” the statement said.
A man claiming to be the group’s leader, Abubakar Shekau, appeared Monday in a video announcing he would sell his victims. The video was first obtained by Agence-France Presse.
“I abducted your girls. I will sell them in the market, by Allah,” he said, according to a CNN translation from the local Hausa language. “There is a market for selling humans. Allah says I should sell. He commands me to sell. I will sell women. I sell women.”
Boko Haram’s name means “Western education is sin.” In the nearly hourlong, rambling video, Shekau repeatedly called for an end to Western education.
“Girls, you should go and get married,” he said.
In her statement, Pillay condemned the “violent abduction” of the girls.
According to accounts, armed members of Boko Haram overpowered security guards at a school in Nigeria, yanked the girls out of bed and forced them into trucks. The convoy of trucks then disappeared into the dense forest bordering Cameroon.
Pillay has contacted Nigerian President Goodluck Jonathan and urged the government to take all necessary measures to ensure that the girls are freed, her statement said.
Pillay, along with three other African United Nations women leaders, sent a letter reminding the Nigerian government of its “legal responsibility to ensure that girls and boys have the fundamental right to education and to be protected from violence, persecution and intimidation,” according to her statement.
Nigeria’s finance minister said Monday that her country’s government remains committed to finding the girls, but should have done a better job explaining the situation to the public.
“Have we communicated what is being done properly? The answer is no, that people did not have enough information,” Ngozi Okonjo-Iweala told CNN’s Richard Quest.
It’s difficult to release information about the search for the girls, she said, “because you are dealing with people that you don’t know, and you don’t know … what they might do to these girls.”
The kidnapping has sparked international outrage, much of it expressed on Twitter with the globally trending hashtag #BringBackOurGirls.
‘I will sell them,’ Boko Haram leader says
What’s at stake in war against girls’ kidnappers?
6 reasons why the world should demand action
Journalist Aminu Abubakar reported from Nigeria, and CNN’s Ashley Fantz wrote this report in Atlanta.

0 thoughts on “MILITANTS HAVE TAKEN OVER 200 GIRLS IN NIGERIA”