So many people claim to have a ‘sweet tooth’ and often times ensure that its cravings are well satisfied. From sweets to candies, lollipops, chocolates and much more, it is soothing to consume a substance that appeals to this sweet tooth, but how good is sweet for the health? Some medical experts belong to the school of thought that the longest life span in this century happens to be found in Asian countries like China because the people relish less sweet substances. 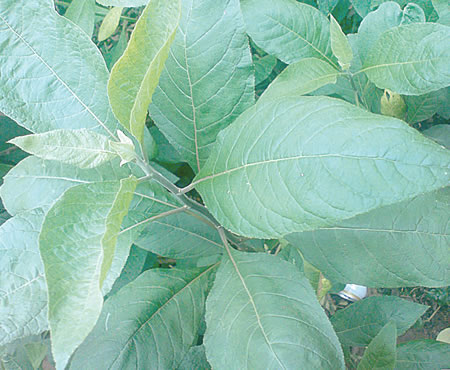 Nigeria, is endowed with a variety of plants, a good number of which have been discovered to possess a string of health benefits. Among these plants is Vernonia amygdalina, a member of the Asteraceae family. It is a small shrub that grows in tropical Africa. It is commonly called bitter leaf because of its bitter taste but in local parlance, it has a number of other names. The Yoruba in the South West call it ewuro while the Igbos in the eastern part of the nation refers to it as Onugbo. In the north, it is called chusar-doki by the Hausas and Ityuna by the Tiv people. Also, cooked bitter leaves are a staple vegetable in soups and stews of various cultures throughout equatorial Africa.

While many may run away from bitter leaf because of its bitter taste, there are numerous benefits that can be derived from its juice if and when its bitter taste is overlooked. 52-year-old business woman, Bayode Bamidele attests to the healing power of the bitter leaf juice thus: “as a young girl, I was raised by my grandmother and she had a way with herbs. Every time I felt feverish, she would manually squeeze out the bitter leaf juice and make me drink it. I hated it and used to throw tantrums but somehow I got used to it. Till today, I barely make use of anti malarial and I am mostly in good health. It just pains me that children of today would rather have all these sugar-based tonics or sweet-coated tablets. These herbs are powerful.”

Scientifically substantiating Bayode’s claim is this study “A clinical trial of the traditional medicine Vernonia amygdalina in the treatment of uncomplicated malaria” which was carried out in 2009 and published in the Journal of Alternative and Complementary Medicine. The study stated that leaves of Vernonia amygdalina are widely used in Africa to treat malaria and that this may be because it is widely available, accessible and affordable in many remote areas that do not have ready access to modern medicines.

The study therefore, in 2009, examined the efficacy and safety of an infusion of fresh V. amygdalina leaves for the treatment of uncomplicated malaria in patients aged 12 years and above. It discovered that the remedy was associated with an adequate clinical response (ACR) at day 14 in 67 per cent of cases. However, complete malaria parasite clearance occurred in only 32 per cent of those with ACR, and of these, recrudescence occurred in 71 per cent.

The research further stated that there was no evidence of significant side-effects or toxicity from the bitter leaf juice. It was concluded that further studies may be needed to determine whether the efficacy can be improved by increasing the dose, changing its mode of preparation, or by adding other antimalarial plants.

Also, in January 2013, a group of researchers published an article in the International Journal of Pharmaceutical Science Invention called “Nigerian foodstuffs with tumour chemosuppressive polyphenols.” Based on the findings of that article, the phytochemical screening of bitter leaves revealed the presence of tannins, phlobatannins, flavonoids, steroids, terpenoids, saponins and cardiac glycosides, which are the most important bioactive constituents of medicinal plants.

These bioactive constituents of Vernonia amygdalina, according to the study, also have curative active principles such as lovastatin antilipemia, pleurotin antibiotics and beta-glucan polysaccharides with heavy molecular weight and immunomodulator, immunostimulant properties. Polysaccharides are known to stimulate the immunological system using three mechanisms: interferon production, excitation of complement chains and the activation of macrophages, inducing organism’s defense.

According to these experts, bitter leaf when consumed daily, prevent oncogenesis and metastasis in cancer cases; therefore, it is used as a co-adjutant therapy in chemotherapy. In summary, Vernonia amygdalina extracts were discovered to help suppress, delay or kill cancerous cells in many ways, such as: Induction of apoptosis as determined in cell culture and animal studies, enhanced chemotherapy sensitivity – V. amygdalina extracts were discovered to render cancerous cells to be more sensitive to chemotherapy.

The leave extract, which is the bitter leaf juice, was found to bring about inhibition of the growth or growth signals of cancerous cells and suppression of metastasis of cancerous cells in the body. Also the study discovered that bitter leaf juice extracts also strengthens the immune system through a process known as cytokines regulation. As bitter as it may taste, the health benefits of bitter leaf and bitter leaf juice goes far above its bitter taste. It speeds up metabolism thereby reducing the chances of its consumers developing constipation and increasing the usage of the stored up fat indicating that it can be of great use to those who desire weight loss.

Bitter leaf juice also helps to reduce high sugar level in the blood because it speeds up the rate of metabolism and glucose uptake by the cells of the body thereby reducing the blood-sugar level, which is a prodigious news for diabetic patients.

Bitter leaf juice works on skin rashes, eczema, ring worms and any superficial skin ailments. This is possible because bitter leaf has antibiotic and antifungal properties. It is also said to soothe and cure pile by experts.

The bitter leaf has anti-oxidants properties thus, taking a cup of bitter leaf juice a day, is a great way to detoxify the body of harmful toxins. Bitter leaf juice is said to increase breast milk production in nursing mothers. Bitter leaf juice is used by local women in Guinea-Bissau to contract the uterus after childbirth and therefore should not be taking during pregnancy or if you’re trying to conceive, because high intake might cause miscarriage.