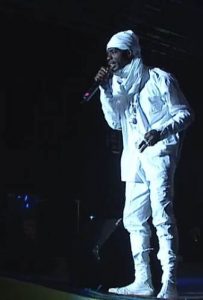 MONTEGO BAY, Jamaica — Veteran deejay Ninja Man delivered an entertaining set to open the second segment of Sumfest Dancehall Night now on at the Catherine Hall Entertainment Centre in Montego Bay, leaving his fans begging for more.
The large crowd responded to the ‘Don Gargon’ who was joined on stage by Tinga Stewart. They combined to perform Under You Love, Gal Gimme Piece, and Cover Me.
Ninja Man who was later also accompanied by deejays Specialist and Don Husky could do no wrong as he belted out staples hits Naw Go Love It, Jamaica Town, Ninja Me Ninja.
He was the first performer to receive an encore on the night.
Ninja was followed by Mr Vegas, another seasoned performer, who increased the tempo as he went through ‘old school’ selections such as I am Blessed, Man a Gallis and Tek Weh Yuself.
The ‘Heads High’ artiste reeled off his string of hits to the delight of the Sumfest crowd.
Other artistes to perform include Bounty Killa and i Octane who will close Dancehall Night.