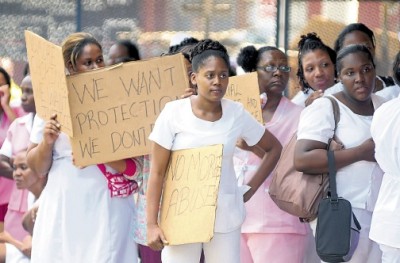 MEDICAL workers at the Kingston Public Hospital (KPH) yesterday staged a protest after a mentally ill patient attacked a nurse at the downtown Kingston institution.
According to the angry protesters, the nurse was doing checks on Ward 2A when she was chased by a man, who was a psychiatric patient.
Jennifer McLeod, who claimed she witnessed the attack, said the nurse was also hit by the man.
“If it weren’t for me and another man the nurse could have been killed by the man this morning,” she alleged.
“When I see what was happening I could not believe. The man ran down the nurse, held her by the neck and struck her to the side of her head,” the woman told the Observer as she stood close to where angry protesters had gathered.
The nurses said yesterday’s incident was the latest in a series of attacks on medical professionals as they carry out their duties at KPH, the island’s largest hospital.
“This is what we have to face on a daily basis from patients right across the board and we are tired of what is happening and want the matter to be addressed,” said one protester.
“When it is not attacks, we are faced with threats, if someone should carry out some checks we nurses and other medical staff get more than 100 threats per month and we are concerned for our safety,” said another nurse.
Yesterday’s protest triggered an emergency meeting with officials from the South East Regional Health Authority (SERHA), which later announced changes to improve the management of psychiatric patients at the hospital.
Among the planned changes are that Wards 1A and 1B will be retrofitted with a designated area for psychiatric patients in order to allow for a safer environment for both staff and patients.
“The engineers have been instructed to immediately conduct an assessment to determine the requirements for retrofitting the wards, SERHA said in a statement late yesterday.
Additionally, psychiatric aides and nursing staff will be assigned to Wards 1A and 1B by next Monday. A psychiatric aide will also be assigned to the Accident and Emergency Department.
“Effective immediately, all psychiatric patients will be assessed and stabilised by an on-call psychiatrist in the Accident and Emergency Department before being transferred to the wards,” the health authority said.
SERHA Board Chairman Dr Andrei Cooke also noted that the authority has been proactively implementing measures to deal with the management of psychiatric patients at KPH.
“We have been recruiting both medical, nursing and support staff to provide treatment and care for these patients,” he said. “We have also partnered with the Bellevue Hospital to strengthen our capacity to deal with psychiatric patients.”
Dr Cooke said the authority is extremely concerned about the frequency with which health-care workers are being attacked and abused by patients. He also noted that steps are being taken to train the staff on how to respond to violence.
Last week, nurses at the Mandeville Regional Hospital staged a similar protest after one of their own was attacked by a patient there.