VENDORS at Old Harbour Market in St Catherine are convinced that their place of work is the “worst” in the island, saying that it was not built to “comfortably” accommodate them.

Apart from being unsanitary, they say the facility has no windows, inadequate lighting and poor security. So much so that they refuse to sell inside the market, instead opting to ply their trade on the outside.

On Monday when the Jamaica Observer visited the facility, a handful of vendors were seen selling in an open area near the market while the facility was locked up.

“You nuh see a madman house dat!” exclaimed one vendor who gave her name only as Marie.

She went on further to suggest that the market is used as a toilet.
“Nobody can’t sell inna dat. In there is dark and no air holes nuh in deh. It did construct bad from morning,” she reasoned.

According to her, the terrible state of the market had resulted in the relocation of several vendors and a massive decline in customers.

“Business a run down. Right now me run in bankruptcy because me tek out a loan fi upgrade mi business and me cyaan pay it back,” she shared. “Me cyaan even throw a partner.” 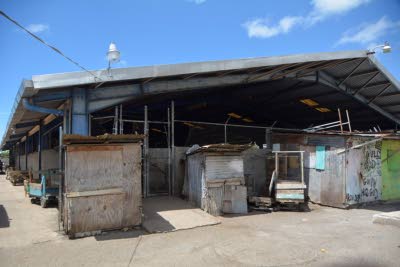 Marie said the vendors had asked the St Catherine Parish Council from last year to remove a section of the wall to allow air and light in, and also so that the vendors would be visible to people on the outside. However, she said that to date their pleas have fallen on deaf ears.

She also raised concern about the security inside the market, while pointing out that there was an incident last year when a woman was held up and robbed by a gunman.

She said this has caused fear among other vendors but that neither the parish council nor police had taken their concerns seriously.

She was supported by another vendor, Joyce Lyn, who said that with no security, sellers have to stand the losses when their goods are stolen.

“The watchman weh dem have here, dem seh a fi watch Government property, but where is the property?” Lyn asked.

“Time gone in here used to be flooded with people, now a few people. If yuh nuh mind sharp, yuh goods spoil on yuh,” she added.

According to her, the parish council is only interested in collecting their fees.

“Dem come here partly every week, but what yuh tell dem fall on deaf ears. All dem come and do is talk,” she argued.

“And when April come, dem come for dem $2,500 and when yuh tek a stock, if yuh nuh pay yuh cyaan come in here,” Lyn said, noting that that she could recall two occasions when they chained the market gates and refused access to those who didn’t pay their fees.

“This market want a complete makeover and people are not coming because of the state; but dem need to organise better,” said James, another vendor.

Marie, meanwhile, is hoping that a private sector company will step in to help refurbish the market.

Observer was informed that the phone lines were affected by a recent power outage.

4 thoughts on “OLD HARBOUR MARKET THE WORST IN JAMAICA”