POLICE HUNT FOR COUPLE WHO WENT MISSING AFTER DISEMBARKING IN TRELAWNY

Police appeal for help as US couple on luxury Caribbean boat cruise vanish after disembarking at Jamaican port
Hayden Gerson, 33, and Alisha Frank, 32, vanished early Tuesday morning
Police believe they had been planning to make a trip to Montego Bay
On average, one person every month disappears while on a luxury cruise 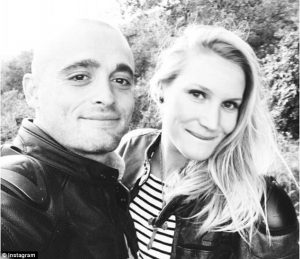 Police in Jamaica are trying to locate two Americans who disappeared on Tuesday during a luxury cruise stopover on the Caribbean island.
Hayden Gerson, 33, and Alisha Frank, 32, of San Diego, California have not been seen since they disembarked at Falmouth Pier in Trelawny two days ago.
Gerson is the father of a young daughter.
Police believe they were planning to make a trip to Montego Bay – a popular tourist city on the island that features duty-free shopping and golden sand beaches.
Gone: Hayden Gerson and Alisha Frank (above) vanished early Tuesday morning

Mr Gerson was wearing light-colored shorts and a grey t-shirt, while Ms Frank was wearing a red skirt and red blouse, according to the Jamaica Observer.
Making matters even more difficult is that Ms Frank is off social media, so she will not be posting any photos that could lead authorities to the couple’s location.
She posted on her Facebook and Instagram accounts earlier this week; ‘I have decided to take a much needed break from social media for the next seven days. I challenge each of you to do the same by consciously leaving your phone at home while you go out into the world to explore.
Locationb: Police believe the couple was planning to make a trip to Montego Bay – a popular tourist city on the island that features duty-free shopping and golden sand beaches

Locationb: Police believe the couple was planning to make a trip to Montego Bay – a popular tourist city on the island that features duty-free shopping and golden sand beaches
CRIMES AGAINST AMERICAN TOURISTS IN JAMAICA
Crime has long been a problem in major Jamaican tourist areas but is largely limited to pick-pocketing. There is also the occasional armed robbery, which can turn violent if the tourist is resistant to hand over their valuables.
A majority of the crime in the country is carried out by gangs.
In 2014, there were five US citizens murdered; 36 reports of robbery; three reports of rape and/or sexual assault; 14 reports aggravated assaults; five reports kidnapping (attempted kidnappings); 10 reports of domestic violence; nine reports of child abuse; and seven other crimes against America tourists.
The number of sexual assaults committed by hotel staff and workers against tourists has decreased in recent years.
Most of the crime in the country is Jamaican in Jamaican, and the island nation has one of the highest murder rates in the world of 45.1 people for every 100,000.
Source: US Department of State
‘It is up to each of us to take a break and come back to our inner goodness by being as present as possible.Wish me luck!I miss you guys already.xoxo.’
Ms. Frank, who details her past struggles with drugs on her blog, now works as a a life coach, Reiki Master, yoga instructor, intuitive healer and writer.
Such disappearances from cruise ships are surprisingly common – on average one person a month goes missing from luxury liners.
While many resurface only hours or days later – and are more often than not hit with Immigration Act charges – some have disappeared entirely.
Theories include something sinister has occurred on land, or they may have wanted to vanish, or that they had an accident while at sea.
Cruise Law News reports that in the past four years there have been six passengers who have gone missing in Jamaica, but that all were eventually found safe.
In all those cases the individuals were trying to extend their stay despite the fact that it is illegal for cruise ship passengers.