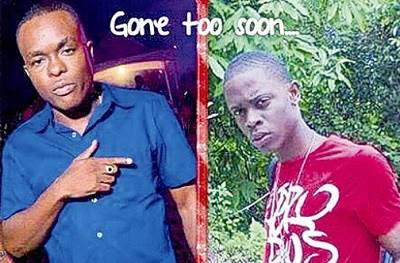 It was therefore a shock for colleagues and friends when they heard that the two were dead in an alleged case of murder/suicide that shook the White River community near the tourist resort town of Ocho Rios, St Ann in the dead of night.

Smith, stationed at St Ann’s Bay, allegedly shot Walsh, who was stationed in Ocho Rios, while they were at the Grass Hoppa Bar and Grill in White River. He is reported to have then turned the gun on himself while in a vehicle transporting Walsh to the hospital.

The news appeared to have devastated the St Ann police who were trying to come to grips with the tragedy when the Jamaica Observer visited at sunrise Sunday.

“The mood in the division is very sombre” said head of the St Ann Police, Superintendent Steve Brown, his own face a mask of grief. “The two police officers who died were very very well-known and very popular. They were best friends; you never see one without the other. Two talented, two bright young men. It’s a really really sad mood in St Ann,” he said.

However, he said he was unable to say exactly how the incident unfolded as investigations are on-going.

“We can only confirm that two policemen from my division are dead and they died under very tragic circumstances and the information we have is that one shot the other and shot himself afterwards. The investigators are carrying out in-depth investigations at the moment,” Brown stated.

However, while the police have not been able to confirm what exactly unfolded, persons who allegedly witnessed the first incident have their version of what happened. Some persons have stated that the two were arguing when Smith shot Walsh. However, one patron at the bar and grill said the two were actually playing when Walsh was shot.

There are unconfirmed reports that Smith after shooting Walsh called for ‘backup’ informing colleagues that Walsh had been shot. Police officers reportedly went to the rescue not knowing that Smith was the one who had shot Walsh. Hence, he was not relieved of his firearm in the hurried process to get Walsh to the hospital. Smith who was said to be driving in the back of the service vehicle shot himself while on his way to the hospital with Walsh.

A policeman close to the two said Grass Hoppa was a regular hang out spot for the two who were fast friends.

“Smith is not that kind of person,” the policeman said. “No one expected it.”

Another policeman commented: “He does not let anything bother him, he was always smiling.”

Walsh, the leader for the Content Gardens Police Youth Club was also described as an outstanding individual. Trevor Grier, president of the youth club said the death of the club’s leader has shocked members.

“I don’t know how I’m going to console my clubbites because this morning everybody’s crying,” he stated, adding: “He was an active leader in the club; he was always there from the first day they introduced him to us. He was the person we could call for anything at any hour, day or night.”

The age of the two men was not confirmed yesterday but both men are believed to be in their twenties. Walsh was a probationer while Smith served for some time in the police force.

Family members of the dead men as well as members of the Jamaica Constabulary Force were counselled on Sunday. Superintendent Brown said the Force chaplain along with several pastors came out to offer counselling. He said some ministers abandoned their churches Sunday morning to assist.

Investigators from the Independent Commission are also investigating the incident.

In the meantime, Opposition spokesman on national security, Derrick Smith expressed shock at the reports of the murder/suicide.

“Sunday’s murder/suicide in St Ann brings into sharp focus the temperament of police officers and their capacity to exercise restraint, both on and off the job. Even more importantly, it raises question as to whether the JCF has sufficient safeguards in place to identify members under particular stress or whose conduct has become high risk, and to take mitigating actions,” he stated.

Smith called on Police Commissioner Dr Carl Williams to ensure that members of the JCF are informed of the responsibilities that come with carrying a firearm.

“The enormous responsibilities that come with the possession of a firearm must always be impressed upon members of the Jamaica Constabulary Force. I am urging Commissioner Williams to ensure that this is being done and is being done in a manner that is likely to see good temperament and greater levels of restraint being exercised by members of the constabulary where firearm usage is concerned,” he stated in a media release on Sunday.

Caption: Independent Commissioner of Investigations officers on the scene at White River.