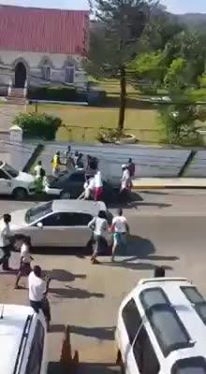 KINGSTON, Jamaica — A video recording showing what appears to be a cop shooting a man during a conflict, has been making rounds Monday on social networking sites Facebook and Twitter

The video is captioned, ‘this happen in Hopewell this morning.”

Hopewell is a community in Hanover, Jamaica.

The video shows a man in police uniform in a struggle with another man. Both men were on the ground in the midst of a crowd. The officer then apparently discharged his weapon several times before standing up.

The man was left writhing in agony as the ‘officer’ removed what looked like a machete from his grip.

The extent of the man’s injury has not yet been ascertained, however passers-by were seen assisting him before the recording ended.

The Corporate Communications Unit (CCU) has confirmed that they are aware of the video being circulated but has declined to comment on the matter, only offering that they are not sure of the circumstances leading up to the confrontation that was videotaped.

Several social media users have commented on the video, most of them stating that the officer used necessary force based on the circumstances.

“All the people saying the police wicked, did you not watch the video??? the police had all right to use force at that point. that is clearly self defense,” one person posted.

“I find this rather interesting how people are quick to say police wrong but didn’t acknowledge the crowd there standing around to observe instead of separating them and if any of y’all know anything about the law u would know attacking an officer gives him the right to use excessive force,” another added.

While another Facebook user said, “Jamaican police need training, them too trigger happy, a bunch of dunces they all are, every one a dem.”