Massive robbery at Courts Port Antonio
Detectives attached to the Port Antonio police station are now probing a massive robbery at the Courts Port Antonio branch.
According to the police unknown assailant(s) gained entry to the furniture and electronics store by cutting through the building’s roof.
The police say despite an alarm going off alerting the security company attached to the store early Sunday morning at about 2:30am, no report was made to them.
Instead when staff turned up to open the store this morning at 8:30am, the police were called in to probe the robbery.
Among the stolen items are electronics to include; tablets; DVD players; phones and four smart televisions. An estimated value of the items stolen is still being calculated.
Meanwhile, several customers were left inconvenienced due to the robbery up to late Monday afternoon as the police processed the scene. 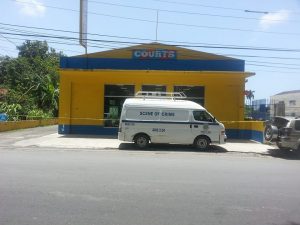