PORTIA SHE BEAT KENYA SHE………. 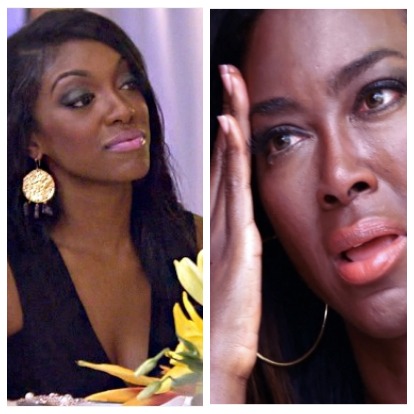 Porsha Stewart has had enough of Kenya Moore’s nasty trash talking and RadarOnline.com has exclusively learned that during the reunion filming on Thursday she lost her temper and “beat the sh*t” out of her co-star.

“Kenya brought sex toys to the reunion taping to taunt Porsha about Kordell’s sexuality and she couldn’t take it anymore,” an eyewitness told Radar about the Real Housewives of Atlanta drama.

“Porsha beat the sh*t out of her! She is a little thing and she jumped on her and pulled her down to the ground by her hair, and Kenya doesn’t have a weave, it is all her own hair.”

The physical fight came as no surprise to those on the RHOA reunion set, with the source telling Radar that Kenya completely crossed a line by mocking Kordell’s sex life.

“Porsha was sick of her saying that she was Kordell’s beard and those toys were the last straw. Porsha is a skinny thing but she was whopping her butt!”

“They couldn’t get Porsha off Kenya!” the source told Radar.

Stay with RadarOnline.com as the drama unfolds between Porsha and Kenya in the ATL