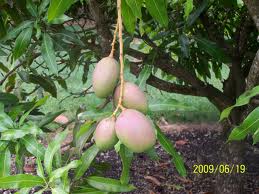 A bag-juice vendor who stole four St Julian mangoes from off a tree was shown no mercy Tuesday and was slapped with a 30-day jail sentence.

Smith, who had pleaded guilty to praedial larceny, tried to worm his way out of the sentence after the magistrate told him that she was going to send him to prison for his actions.

“I didn’t go ova him yard,” Smith said, explaining that he had picked the mangoes from outside the premises.

Added Pusey, ” A man has to pay taxes for his property and should be able to enjoy what is planted on his premises.”

Nelson was arrested on February 16 after the complainant saw him picking the mangoes at premises on Donhead Road, Kingston 6, and alerted a security guard who in turn notified a police officer.

Nelson, who ran from the premises after stealing the mangoes, was found hiding in a culvert on the roadway.

The complainant said Smith had threatened to kill him when he shouted at him at the time the mangoes were being picked.

The four mangoes were valued at $800.