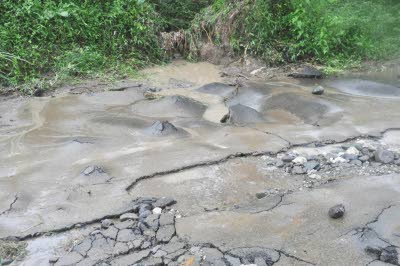 The extent of the damage to Seaman’s Valley road.Photos: Everard Owen

A swing bridge that spanned the Rio Grande and linked the communities of Cornwall Barracks and Ginger House was also washed away, affecting approximately 700 people, mostly farmers.

When the Jamaica Observer visited the area Friday afternoon, the water from the White Cane River had subsided, but damage to the road was visible.

Farmers told the Sunday Observer that they lost bananas, pineapples, dasheen, peppers, and other cash crops. There were no reports of loss of livestock, but as the rains returned late Friday evening, farmers started moving their livestock to safe areas as the water began rising in the Rio Grande.

“The rain a fall from morning and we were here, and we see the water come up on the bridge and come over and wash away part of the man banana walk,” Howard McKenzie told the Sunday Observer, while pointing to a nearby farm during a game of dominoes. “Water also wash through my pineapple walk, about five acres, and it mash up Cornwall Barracks.”
Another farmer, Archie Anderson, said: “My farm damage bad; about a acre of dasheen and plantains wash down. It damage bad.”

O’Neil Hamilton was distressed as he looked over his damaged crops on his farm. “The rain start fall from about seven o’clock and it wash out everything. The river just come in and damage everything — pepper, lettuce, pak choy, callaloo, pumpkin. Everything wash out. We just started to reap, just started; see the lettuce dem deh,” he said, pointing to the damaged crops.

Member of Parliament for Portland Eastern Dr Lynvale Bloomfield said he could only give a qualitative assessment at this time. “The entire constituency has been under rain since yesterday, non-stop, with a few intermittent periods of relief,” he said.

The road and bridge at Sea View Farm, he said, were entirely flooded and remedial work that was done on the road has been wiped out.

“Both entrances to Port Antonio were flooded out, and in the Rio Grande Valley, as far as we know is that at Seaman’s Valley, the White Cane River has overflown its banks and has affected the road that was recently repaired,” he said.