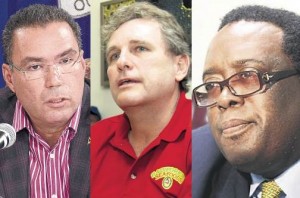 (L-R) Daryl Vaz, Brian Jardim and David Rowe
JAMAICAN-BORN Florida attorney David Rowe has been found by a Florida court to have destroyed evidence on a computer at the centre of his libel case against Daryl Vaz, the former information minister, and Rainforest Seafoods Limited.
In the long-running case, Vaz accused Rowe of being the author of widely distributed hate-mail that he said had libelled him and several other high-profile Jamaican politicians and businessmen.
In the latest of several orders against Rowe, the 17th Judicial Circuit in and for Broward County on August 14, 2014, issued an “Order Granting Plaintiffs’ Fourth Motion for Sanctions for Willful Discovery Violations and for Spoliation of Evidence”.
The court said Rowe had engaged in willful discovery violations and sanctionable conduct throughout the case, and ruled that it would give the jury “an adverse inference instruction that the computer data was deliberately deleted, during the relevant time period, and cannot be retrieved”.
The court also awarded Vaz and Rainforest Seafoods costs against Rowe who is the son of a former top judge, Ira Rowe. This is in addition to the US$51,347 awarded on January 13, 2014 for the defendant’s sanctionable conduct at an earlier stage of the trial.
Almost two weeks after that August 14 order — on August 27 — the court also denied a motion from Rowe seeking protective order to prevent his deposition in aid of the plaintiffs’ execution of their US$51,347 judgement against him.
In that motion, Rowe argued that he should not have to respond to the plaintiffs’ discovery requests in aid of execution and should not have to appear for deposition. Vaz and Rainforest submitted that those discovery requests were needed in order to collect on the US$51,347 recorded judgement which Defendant Rowe had failed to pay to date.
The court required Rowe to respond fully to the discovery requests by September 26, 2014 and to appear for his deposition no later than October 6, 2014.
The libel suits were first filed against Rowe on April 9, 2012 on grounds that the attorney circulated email under the pseudonym “Paul Azan”, in which allegations of corruption were made against several Jamaican politicians and businessmen, including Vaz and Rainforest Seafoods principal Brian Jardim.
The email, which were globally circulated on the Internet on March 22 and 23, 2012, also allegedly libelled former prime ministers P J Patterson and Bruce Golding; former Finance Minister Audley Shaw; former Agriculture Minister Christopher Tufton; and Gordon ‘Butch Stewart’, chairman of the Sandals group, which includes the Jamaica Observer.
The court ruled against Rowe after he failed to produce the computer on which the libel was allegedly created. In a separate judgement, Rowe was ordered to pay attorneys’ fees after he improperly removed the case from a state court to federal court just prior to a scheduled state court hearing.
The libel suit claimed that Rowe, “hiding behind pseudonyms… fabricated and published a document purported to be an official US Law Enforcement Memo to Turks and Caicos Special Investigation and Prosecutions Team”. The document made “direct accusations of bribery, money laundering, corruption, and close affiliations with a notorious convicted drug lord”, the complainants said in court papers.
Rowe denied being the author of the document in question and filed an unsuccessful motion to dismiss the lawsuit.
Vaz and Rainforest requested that Rowe produce, for copying and inspection, the computer he used during the March 22 and 23, 2012 time frame. Rowe first agreed then failed to do so, causing the court to make a second order. When Rowe eventually produced a computer on July 18, 2012, a forensic expert for the complainants told the court that it was not the computer Rowe had used and that the accused had produced a new computer that, among other things, “had no user activity on it until May 2012, was not online or capable of sending email or connecting to the Internet until after the lawsuit was filed, and had a new operating system installed on it in June 2012”.
Rowe then produced a second computer which the forensic expert testified to the court had been wiped clean, despite Rowe’s obligation to preserve the computer unaltered. The expert also testified that software used by advance computer users was utilised to delete or alter information on Rowe’s computer. In addition, he said this second computer had a new operating system installed on it in September 12, 2013.
The claimants are represented by Jennifer Glasser and Michael Marsh of Akerman LLP. Rowe is represented by Florida attorney, Jamaican-born David Brown and Rosemarie Robinson. The case is continuing.