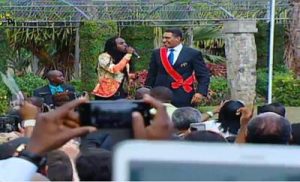 God don’t like ugly! What major contractual breaches? Tell the people the truth and stop tell lie bout you did not perform because of major contractual breaches. Too damn lie!
@nesbethreggae let the people know it is because you did not pull the crowd and you were acting like a platinum artist. You did not want to perform in front of the few true ardent fans that came out for you. Yes the venue wasn’t to capacity.
We kissed your a*s and granted you your every requests. All moneies paid in full. Try note that. We delivered you never did. Simples.
Our team worked extremely well getting the event out there via online and all events in fact everywhere where possible. Promotion was on point. So you can’t even say it was lack of promotion. Maybe lack of promotion on your part because we were begging and pleaing for you to put it up.
We all treated you and your team with respect. Try note it was your team member who was threatening to cancel the show because you did not get itinerary but money was paid though. Tickets were bout though. Visa and work permit were granted though. If you say you did not get any money please remember I have proof.
Whatever damage control you want to do by all means do it but do not try and tarnish our name in the process.
We love our culture and we are here promoting it in the United Kingdom so do not act as if we did not honour the contract.
Nuff respect to @direalkiprich @juniorcatdancehalldeejay @kym_music and our local artists.
“Nesbeth was booked to perform at concerts in London, Birmingham and Luton. However, he did not perform at one of the shows due to what his management team describes as major contractual breaches.”
Look into yourself and tell me if you are happy with your behaviour regarding the show. Did you show love and respect overall? Please to outline your simple demands that weren’t even in the contract but we have honoured them with respect, because we believe if the artists are not comfortable within themselves they are not going to be happy with their delivery.
Again, do whatever damage control you want to do but do not tarnish our name in the process. Thank you.
Sophisticat