SCORES of angry residents yesterday morning staged a protest on Spanish Town Road, in the vicinity of Delacree Park in Kingston, over the shooting death of 26-year-old Albert Roberts, allegedly by a licensed firearm holder. 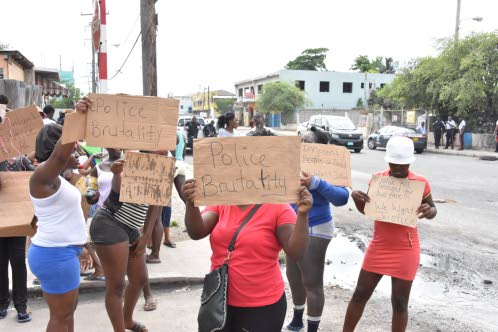 According to the police, a female passenger volunteered to pay for Roberts and another man who had refused to pay when the conductor of a Coaster bus demanded their fares. The driver, who had stopped the bus on Spanish Town, continued his journey after the fares were paid.

It was alleged that Roberts and the other man, after exiting the bus at the St Joseph Road/Spanish Town Road intersection, attacked the conductor and driver with a knife and ice pick. Shots were then fired from inside the bus and Roberts was hit. Police, who were quick on the scene, took him to hospital where he was pronounced dead.

Roberts — a construction worker — boarded the Coaster bus about 12:05 pm on Mandela Highway, near Six Miles.

Residents, however, gave a different account of the events that led to the shooting. One irate woman, who spoke on condition of anonymity, agreed with the events leading up to the bus stop where the two men exited, but alleged that it was the bus conductor who attacked Roberts when he stepped off the bus.

“When him a come out of the bus, the conductor kick him and somebody fling stone on the bus. One licensed firearm holder come out and shoot him in a him head back and go a station go report say him did a try rob the bus,” the woman claimed.

Some claimed that the man who fired the shots was an ex-policeman.

Another person who was part of the angry group alleged that it was the driver who did the shooting.

“The driver kill him, see the blood there. Work him coming from and a lunch time him come on. [He is] a good, good youth in the community. A licensed firearm man kill him for nothing at all because him no have no bus fare. Him shoot him inna him side as him come off the bus, and shoot him two times again in him head. Oh, my God, man, that is wickedness. A wickedness that man how you fi kill a man just so cause a $100; we want justice. Him dead cause him never have $100 for him bus fare,” said the woman.

Esurie Sinclair, aunt of the slain man, said: “Yesterday (Wednesday) morning when he was going away he asked me for bus fare and I gave him $500, and he went to work.”

However, she said that because of rain one day and lack of material he had not worked for two days at the construction site, so had not been paid.