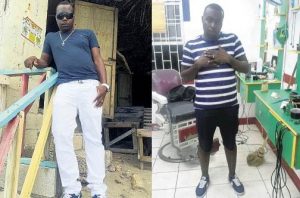 Shelleta Reid was in advanced preparation to fly from her Massachusetts home to visit her country of birth, Jamaica, for the solemn occasion of burying her mother Jocelyn Bryan.

Bryan, 77, had died on Sunday, May 3, from complications from a stroke she had suffered two weeks earlier.

Reid, 53, was distraught by the passing of her mother, and the patriarch of the Bryan clan.

Her face was still stained by tears from the loss, when one week later to the day, her phone rang.

On the other end of Reid’s cellular phone was the bearer of bad news. And in her case, more bad news.

Reid, the mother of five, was all morning last Sunday receiving Mother’s Day greetings and salutations from far and wide. They were plaudits well deserved, as she is a highly-regarded mother of exemplary qualities.

But in a chilling twist, the news no mother wants to hear rammed into her already feeble state of mind like a wrecking ball.

The White Horses, St Thomas native, was informed that her fourth child, Gavin Green, 34, a cab driver, had perished in a motor vehicle accident as he drove with a female companion to Montego Bay.

Reid, on hearing the dreadful fact, collapsed at home and had to be rushed to an area hospital in Hyannis Port, the quiet seaside town in Massachusetts, where she has called home for nearly 10 years.

A week later, Reid is still finding it difficult, impossible even, to come to grips with the death of her son, and before him, her mother.

Fate, in one fell swoop, had robbed this loving mother of two of the dearest people in her life.

“I can’t believe my baby is gone… I just can’t believe it. I lost mama and now my baby,” Reid managed to say between heart-wrenching weeping.

The community of White Horses where Green grew up and lived, was plunged into a dark hole of mourning as its members tried to make sense of it all.

Relatives and friends seemed in a daze, trying in failed attempts to wrap their minds around the double tragedy of this family.

As the news of Green’s death spread like wildfire in St Thomas, people who knew him wandered from their homes, spilling onto street corners with disbelief and grief painted on their faces.

Many confessed afterwards that their special Mother’s Day dinner did not go down easily that day. Some didn’t even bother try eating it. And among them, was Teshuria Gayle, the sister of Green.

“When I got the news, I couldn’t eat my Mother’s Day dinner. Mother’s Day was over for me. It’s like this is not real… I lost my grandmother the week before, and now my brother, this just does not make any sense,” she lamented.

Green, who was also known as Nash and Tampoo, will leave a void in the life of cousin Damion McKnight, who said the death in part represents unfulfilled dreams.

“Tampoo was not only my cousin, but he was like a brother to me and we had a very close relationship. Now that he is gone, is like he has taken a piece of me. He and I had a lot of plans to uplift our family and now he will not see them come through,” he told the Sunday Observer.

“Nash was always smiling and he was very kind-hearted and friendly. He was the kind of person that if he holds you as a good friend, he will go all out for you. I can tell you he loved to work because he loved his money,” he said.

Dean Stewart’s legacy of his dear departed friend will be his infectious laughter, and his great sense of humour.

“He was a funny man, who once he comes around you, you have to laugh and I will miss that about him. He loved to go out and party and was always there for his friends,” expressed Stewart.

Nephew Yekini Stewart, who was out on the town with his uncle the night before he perished, said Green was the person who kept him in line.

“He was a good uncle, and he wasn’t the kind of person who was not going to give right when I am wrong. Many times when I slip up, he was always there to correct me. I will miss him because he was always the one to take me wherever I wanted to go, and the one to help me if I needed to do something,” he said.

A number of people had a foreboding about Green’s planned trip to the north-west tourist town of Montego Bay, and at least four of them claimed they tried to discourage him.

“I asked him not to go, but he told me that the plans could not change,” said Canada-based friend Nicely.

The tragic irony of a mother losing her son on a day dedicated to celebrate life, love and family, has shocked not only those living in White Horses, but the wider Jamaican community.

Whether or not it was destiny, a sequence of unfortunate circumstances, or divine ruling from above, the pain for those who will mourn Gavin Green will be no less and only time will heal bleeding hearts.

Green and his female companion Assia Sinclair, who was also from St Thomas, were heading to Montego Bay when their Toyota Corolla motorcar rammed into a guard rail in Carey Park in Trelawny killing both of them.

Green, who was driving the car, was declared dead on the scene after sustaining multiple injuries, while Sinclair passed as she underwent treatment at hospital.

Green was trapped inside the vehicle, and after some toil, was cut by rescue worker from the Jamaica Fire Brigade.

From accident site data and physical evidence, it is theorised that Green fell asleep at the wheel. In support of that possibility, friends and family members revealed that Green and Sinclair had partied the Friday and Saturday night before and may have been exhausted and not in the best shape to make their cross-island trip to Montego Bay at the time.

A post-morten conducted on Green by Dr Garfield Blake and his team at the Cornwall Regional Hospital on Friday revealed that the cause of death was due to massive lacerations on the left leg and thigh — in some cases measuring 34 centremetres long and 5.5 centremetres deep. He lost a great deal of blood as a result, which is believed to have ultimately led to his death.

Green and his grandmother will be buried on Saturday, May 23, following a joint funeral service in White Horses, St Thomas.

0 thoughts on “SAD BEYOND WORDS”