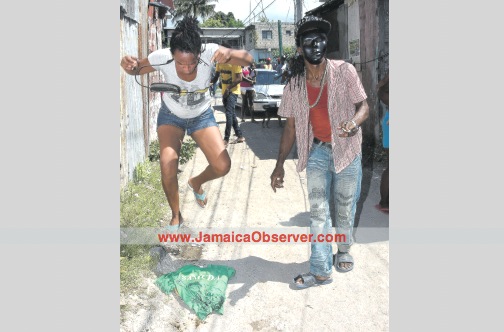 An angry Tanesha Palmer stomps on a T-shirt bearing her MP’s image while a masked man looks on.

RESIDENTS of 85 Red Hills Road, St Andrew, faced with an eviction order, yesterday lashed out at Member of Parliament (MP) Karl Samuda who they allege has offered them no help.

The residents, who burned T-shirts bearing Samuda’s image in protest, said that their dwellings in the informal community were at risk of being demolished.

“The inspector from up a Constant Spring Police Station come wah day and tell wi seh him get orders fi come tell wi fi leave off di land. Dem come yesterday (Tuesday) again and say no longer than tomorrow (today) the bulldozer a come bulldoze down the whole place,” explained Karen Cohen, who has been living in the community for more than 40 years.

“Wi nuh know nothing, wi nuh hear nothing from nobody, no MP nuh come out here,” Cohen told the Jamaica Observer, yesterday.

She said had it not been for the media she and others would not have known that the land had been sold.

“Right now, wi want to talk to Samuda. From dis a gwaan all now Samuda don’t come represent nothing nor we. Dem nuh show wi nuh title, nothing seh people own the land,” Cohen fumed.

She said they learned, through the media, that a plaza is slated to be built on the land.

“Nobody nuh come seh nothing to wi all now seh where wi fi relocate, and if wi a go get back wi things dem. A just the police dem inna di brown suit wi see a come down here all the while,” Cohen added.

Theresa Smith, another irate resident, said that members of her family have been living in the community for decades and had been contributing to Operation Pride.

“Mi mother a 50-odd, mi grandfather dead inna him 70s, a yah him build up, and all these years nobody no come represent us,” she said.

“Tomorrow mawning (today) we nuh know what a go happen. Police come yah a tell we fi come off and go look place fi live ‘cause people want dem land. Mi want justice, mi have a bar and a shop and ah it mi use send mi pickney dem a school,” Smith said.