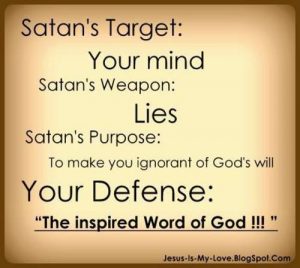 Satan’s target, the mind of man.
June 20, 2014 at 9:55am
Make no mistake, the supreme target of the forces of darkness will always and continue to be the mind of man!
This is so because it is clearly understood by the spirit realm and the natural realm that whoever controls the MIND, at the same time controls the MAN!
Demonic manipulation, is initiated in the life of a person by challenging their material goods, such as their finances, home, cars, health, children, spouses and so on. These things becomes the tools by which the invisible forces of darkness target the mind of the individual. Once this has been accomplished, the victim focuses more on that which is seen as opposed to what’s operating behind the scene, which will always be spirits.
The victim of course, unknowingly, abandons his course of walking in the spirit by waging war on the things of the flesh (Things that are of the flesh or things that he can relate to with his five senses).
One that walks in the things of the spirit is never distracted by addressing the physical things that he sees or the things that are hurled at him from a physical perspective. Instead he’s always in search of the spiritual source influencing what is seen………. As a reminder the kingdom of darkness is and will continue to focus on the mind of their victims be it directly or indirectly, because whoever controls the mind ultimately controls the person!
Again, we are admonished to resist the Devil and he must flee, James 4:7. The Devil is a spirit, right? And the only way one can resist a spirit is:
A) He must identify the spirit in which he intends to challenge and
B) He must use the word of God, which is spirit to challenge that particular spirit.
Cursing another human being is not resisting the devil, physically fighting another person is not resisting the devil, in fact it’s working along with the devil. Instead, holding your peace while observing the behavior of that physical resistance in an effort to identify its spiritual identity of what’s influencing that person, such as a lying spirit, a spirit of hate, bitterness, jealousy, unforgiviness, pride etc. This is what you ought to be waging spiritual war against via prayer.
As a reminder we are not wrestling against flesh and blood (Human beings) instead our war is against invisible beings (evil spirits) whose initial method of operation is to manipulate their victims to shift their focus to things that are physical and abandon the spiritual understanding of their fight, while the powers of darkness focus on securing the mind of their victim, because whoever controls the mind ultimately controls the man!
I want to say to someone this morning, the disappointments, setbacks, being falsely accused and whatever else they’ve done to you. Know for sure that these are just the tools of the kingdom of darkness to pull you away from walking in the spirit. It is the understanding of walking in the spirit where the reality of things reside. Whatever they have done to you in the past or whatever they will do to you today, please ask God to keep you focus on the things of the spirit and to keep your mind from the distractions of the flesh, because whoever controls the mind will ultimately controls the man!
Satan’s ultimate target will always be the mind of man!
Written By: Kevin L A Ewing
kevinewing@coralwave.com
kevinlaewing.blogspot.com

0 thoughts on “SATAN’S TARGET, THE MIND OF MAN- GOOD MORNING”