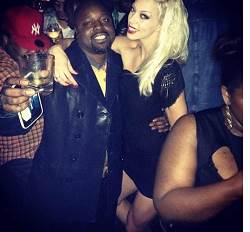 WHILE this year’s staging of Magnum Sting will boast at least eight clashes, the prize purse will be half of what was offered last year: $1.5 million.
To secure this amount, organisers of the Boxing Day stage show have said they are actively seeking sponsorship.
According to Isaiah Laing, CEO of Supreme Promotions, organisers of Sting, the package had to be decreased as Downsound Records CEO Josef Bogdonovich has decided not to be involved in this year’s production.
Bogdonovich, who is said to be part-heir to a sizable stake in the Heinz empire, was instrumental in the show’s last two stagings. His contribution saw the show being televised to 179 countries via pay-per-view.
Laing was quick to point out, however, that the lyrical battles will be just as entertaining.
“We decided to go back to basics and clashes are what brought Sting to the forefront. The Sting audience loves excitement, so we are doing just that. We will just be having intense lyrical fun within a peaceful environment,” he said.
Facing off in this year’s edition at the Jamworld Entertainment Complex in St Cathering are
Gage and Tommy Lee Sparta, Major Mackerel and Wickerman; while Ninjaman is expected to go up against dancehall’s newest sensation Gully Bop/Countryman.
Last year, Blak Ryno surprised the Sting crowd when he walked away with $3 million after he dethroning champion Kiprich.
In addition to the local acts, Sting will also feature a number of regional and international dancehall/reggae artistes including Japan’s Ackee and Saltfish, Bermuda’s Imari and England’s Savannah.
Started in 1984, Sting is known for its lyrical face-off among dancehall artistes.
ADVERTISEMENT