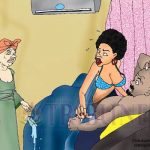 Dear Taiwo,
Kindly counsel me; I don’t know how to do this without hurting my son. I hate to hurting him because he is so loving, kind-hearted and he is my world.

I lost my husband when my children were young, in fact too young but with God on my side, I was able to raise them. My husband and I married young and had our children, four of them (three boys and a girl who is the last born).

It was as if Layi, my husband knew he would die young, because he did all he had to do in a hurry and God blessed him. He died during a brief illness at the age of 39 living me to care for our children alone, but I must confess that he left me comfortable to a large extent.

We had our own house, a four flat apartment, we rented the two flats downstairs out and my late husband furnished and left the other flat upstairs for his children. It was built in such a way that it is accessible from our own apartment. It remained so till today and this is how I found out what was going on.

After my husband’s demise, as mentioned earlier, my children and I went through a lot. I do not have to waste time narrating all these because I want to believe we all understand the typical African set up and in-law issues. We survived to the glory of God and also because I also had a good job.

Layi and I went through a lot, being the first born, he had to help me care for his siblings, he saw my tears, understood my pains and anxieties and several times when I had to go for night duty as a trained nurse, my son will promise to take care of his siblings which he did well.

I can still remember him telling me that, “don’t worry mum, I will do all what daddy couldn’t wait to do for you,” and I must confess he is trying his best.

After his university education, he decided to join the force. I was skeptical, but he assured me nothing would happen to him. He is doing fine and together with his siblings. The joy of every mother, however, is to see her children settled down with their jobs, family and life in general. My wish for Layi would have been completed except for the kind of girl he married.

I was against the relationship from the onset, but when my son insisted that he loved her, I had no choice but to accept her as I do not want to be seen as being tribalistic and I also wanted my daughter-in-law to see me as her own mother.

For a start, Lilian is a secondary school certificate holder and I told my son to brush her up, if he must marry her. We were trying to do this when she became pregnant. There was no time for her to go back to school then, so they had to get married. After which she moved to Kaduna with her husband. She delivered her first son and the second came quickly too.

The northern part of the country was safe then; my son and his family were okay. Because of the children Lilian couldn’t go back to school immediately, I didn’t support the fact that she should be a fulltime house wife, so she started buying and selling. When her second son was old enough, she started travelling to Dubai to buy clothes for sale.

My son’s job takes him out of Kaduna always an two years ago when he was supposed to travel out of the country for a training, we all agreed that Lilian and the boys should move down south. This decision didn’t go well with her, but it wasn’t my making. Layi could be tough and when he makes up his mind, no one can change him.

He more or less forced his wife down south and he insisted that she and the boys will live in my house although at the children’s flat because his entire siblings are abroad. His decision was based on the fact that he doesn’t want me to stay alone, then he didn’t want to spend extra money getting a house as he was about finishing his building somewhere in town.

I don’t know why Lilian would believe I have a hand in her husband’s decision as this was one of the reasons she became hostile and wouldn’t relate with me.

Like I stated earlier, I desire t be her friend and I did all possible to be, but she was antagonistic of my every move so much that she hardly allows my grandsons to visit me as close as we live together and whenever they did, she instructed them not to eat my food as I would poison them. All these I learnt from the boys and also when one of my other daughter-in-laws visited from the United Kingdom. Lilian accused me of so many things, the lady had to tell me because she said she wondered why Lilian couldn’t get along with me.

Late last year, I began to get information that Lilian was dating other men, I don’t dwell on rumours and I wonder why she would do that. The stories started coming not long after her husband came home on holidays and she always visited him. Few months after they came down south, she started school and whenever she wasn’t in school, she would be in her shop. I had no reason to be suspicious of her.

My first grandson, however, came to complain to me bitterly that an uncle sleeps over in their flat. I was shocked because I didn’t believe this could happen right under my nose. From day one that they moved in, Lilian had locked the adjoining door to the flat. She only opened it when her husband came home. I had no business in her apartment, so I didn’t insist that she opened it.

My grandson however, insisted that he would leave the door opened without his mother’s knowledge and call me on phone whenever the uncle sleeps in their house. On the fateful day, I was fast asleep when my phone rang at about 12.30am. I woke up with a start when I heard my grandson, then I remembered what he told me.

I moved to the door and both of them helped me into their apartment. The commotion of entering caught Lilian’s attention. She was shocked to see me and the boys. I don’t know what she would have said or done if her male visitor didn’t come out of the room almost naked to find out what happened.

I would have slumped, but for the fact that my grandsons held me. I was sad, I didn’t say anything, I returned to my apartment and my grandsons followed me. She didn’t stop them this time. I didn’t see her for two weeks, my grandsons had moved in with me. My son called, but I didn’t tell him anything.

She, however, came to see me last week to beg me to please forgive her. I haven’t said a word till date. I asked her to call her mother, but she is yet to do so. I want to see her mother because; she (her mother) supports her against me.

I am yet to tell a single soul, even my daughter who is home on holidays. My son will be back next week, should I tell him? Because he has reported her to me more than twice he also confided in me that one of the reasons he asked them to move down south when he was travelling is because he doesn’t trust her.

.NG Domain Name Registration: Register Your .NG Domains With Upperlink Registrar And Get A Free One Year Hosting!

Click Here To Discover The Only Internet Business Model That Is Guaranteed To Make You At Least One Million Naira Before 31/12/2014.