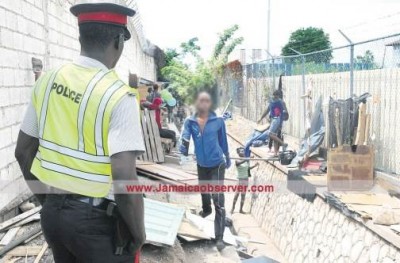 THE police who yesterday discovered a shop being operated in Shoe Maker Gully, New Kingston by homeless gays has expressed concern that the sale of food in such unsanitary conditions could result in serious health problems not only for the men but also the wider commercial district.
“We have found that men living in the area are running a facility where food items such as bun and cheese and other food stuff are sold and this is the same location where they defecate and urinate and we are worried that if it is not addressed it could lead to major health problems in the New Kingston business hub,” head of New Kingston Police Post Deputy Superintendent Patrick Murdock told the Jamaica Observer, following a raid on Thursday.
“During this latest operation several make-shift houses were removed (from the gully),” said Murdock.
He also warned that the authorities would not allow the men to return and wreak havoc in the area.
“We have carried out several operations in the past and the men continue to return and as a result we are working on more long-term measures to address the problem.”
Murdock said this included the establishment of a drop-in centre for the men and the installation of a barrier to prevent them from returning to the area.
“The police have started discussions with political representatives of the area about the establishment of a drop-in centre and so far a number of private sector entities have expressed an interest to assist,” Murdock told the Observer.
Police said the drop-in centre would be an area where the homeless men could stay and also learn a skill to prepare them to be reintegrated in society and provide them with the opportunity to contribute positively.
Councillor for the Trafalgar Division Kari Douglas shared similar sentiments.
The police said while some organisations were willing to assist there was need for others to come onboard.
“The effort to remove the men from the gully should not be left to the police alone but should be a combined effort from all stakeholders,” he said.