SIGNS YOUR BOYFRIEND IS CRAZY 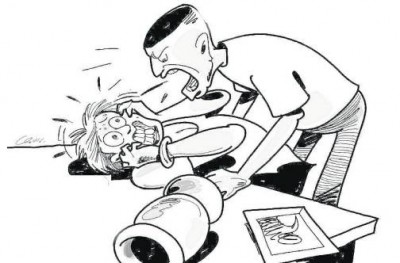 LAST Monday we related instances of girlfriends gone crazy, a piece that generated a lot of interest. By popular demand, this week we present the women’s take on the issue, the crazy ex-boyfriends that made some women wish never to date again.
Many women will tell their new men about their stalker ex-boyfriends, and in some cases the description is unjustified, as women’s actions often cause otherwise sane men to snap.
But in other instances the description fits to a T, as explained by the women below. How do you know he’s not just your run-of-the-mill ticked-off gentleman, but that he has delved into the unstable?
Monique, 23:
I was dating this guy but the relationship wasn’t serious. I would go out with him, but date other guys too. We never had the exclusive talk, so I figured he was OK with the arrangement. Well, one night I came home from a date and my date walked me to my apartment. Suddenly my door swung open, and inside my house, at the doorway, stood this guy, naked, torso covered in peanut butter, and chugging a beer. He would not move, and my date got uncomfortable and left, after confirming that I knew the crazy naked man. When I asked him how he had got into my house, he revealed that he had climbed in through the bathroom window. To make matters worse, when I told him that what he did was not OK, he broke down and sat on the steps outside, naked and bawling, while some stray cats from the complex licked the peanut butter off him.
Danielle, 30:
At first I thought my ex boyfriend’s possessiveness was cute, as I thought it showed how much he cared about me. But soon I began to realise that there was something off with him. If I tried to go out with my friends, he’d threaten to kill himself. Something as simple as that. It was always threats of suicide, no matter what. His only desire was for us to live alone and without any friends and family, or he would harm himself.
Rebecca, 38:
True story: I called him to tell him that I was working late. When I got home, hours later, he grabbed me, shook me, and accused me of lying. He had been sitting on the couch the whole time, waiting in the dark. After that night he would drive to my office each evening and sit in the parking lot and wait for me. He also had his friends watch my every move, and had them tell him who I spoke to. Even after I left, he would show up at my house late and honk his horn, and show up at my job and just stare. I had to move and that was when the stalking ended.
Sandra, 44:
My experience is the same as that in Ray Stevens’ song It’s me again Margaret. I gave a guy I met at the gym my phone number, and soon realised my error when he would text and call nonstop. After the first text I was turned off — the man couldn’t spell to save his life. His grammar was atrocious. So I told him I had a boyfriend, and had only given him my number because I thought he would have made a good feature for a story I planned to write (I’m a writer). Anyway, he didn’t take the hint and instead called and called and texted and texted nonstop, sometimes just breathing into the phone. Then he switched his number to private, and when he called all I’d hear on the line was Barry White songs. When the Barry White didn’t work, he switched to calling in the middle of the night and playing Korn songs about suicide. It went on for a while, and I had to leave the gym and change my number.
Davia, 32:
I wasn’t even involved with this guy, he had just seen some of my YouTube videos online and decided that he loved me. He had emailed me stating that he was a fan and I emailed him back to say thanks. It went on like that for a while, until he told me that God had willed us to be together, and that that wish I had made to God, on a moonlit night while under a tree, to send me my perfect man, had been delivered. I told him I had made no such wish, but he insisted. He even came to Kingston to try to find me, but luckily he didn’t have my details. Even now, he still messages me every few months or so to ask when I’ll accept his marriage proposal.
Natalie, 27:
I thought my ex and I had parted on good terms. He was the one who broke things off, as he had found someone else. When he told me, I said OK, no drama, because if he couldn’t see what a prize I was, so be it. Well it seems like my reaction upset him, or that he expected me to put up more of a fight to keep him. He called my mother and told her that I had AIDS, and emailed my HR manager to say that I had stolen office supplies. He then told some of my friends that I had given him an STD. It took some time before I was able to clear the air with everyone he had lied to.

0 thoughts on “SIGNS YOUR BOYFRIEND IS CRAZY”