SNOWDEN SAYS HE WAS TRAINED AS A SPY 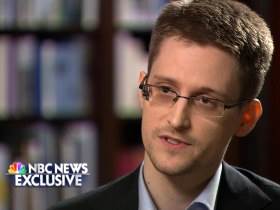 Edward Snowden, the former NSA contractor behind one of the biggest leaks of classified intelligence in American history, describes his previous job as more Bond-like than reported in the past.

“It’s no secret that the U.S. tends to get more and better intelligence out of computers nowadays than they do out of people,” Snowden said in an excerpt from a new interview with NBC News’ Brian Williams that will air Wednesday. “I was trained as a spy in sort of the traditional sense of the word in that I lived and worked undercover overseas — pretending to work in a job that I’m not — and even being assigned a name that was not mine.”

The 30-year-old is currently living in Russia and wanted on espionage charges in the United States after he helped expose some of the National Security Agency’s surveillance programs.

Snowden went on to say that the U.S. government has tried to discredit him by downplaying the number of positions he held while working for the Central Intelligence Agency and the NSA.

“What they’re trying to do is they’re trying to use one position that I’ve had in a career here or there to distract from the totality of my experience,” said Snowden, who added that he worked “at all levels from — from the bottom on the ground all the way to the top.”

“So when they say I’m a low level systems administrator, that I don’t know what I’m talking about, I’d say it’s somewhat misleading.”